Bride of the Trogarians Claims a Top 50 Spot 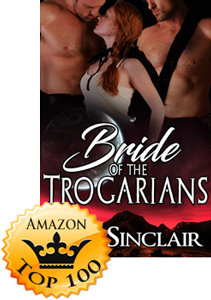 Ava Sinclair‘s latest release, Bride of the Trogarians, has been climbing up the charts and has reached the Top 50 in Amazon’s Science Fiction Romance category! Congratulations, Ava!

★★★★★ Nicole H. Vela @ Amazon.com “Treachery and betrayal…” on September 26, 2016
Iris is willful,beautiful and has a backbone her only crime is she will not submit! Not to a tyrant a betrayor of her people. His followers are blinded by he is treachery and she for one will not tolerate it. General Bron, has wealthy,power and he rains hell on earth to all for the denial of one – Iris. With her friends turning their backs on her she becomes the hated…. she will now be the play toy to two men but not any two …they are Trogarians! Utak and Zios, they are brothers who share everything and have lost it all. They are fierce warriors who are beasts, they are powerful, forceful men who are voracious as they are barbaric. Can Iris find the inner fortitude to come out of this intact or will they break her in more ways than one. When the men realize their people were betrayed it is up to them to save what has become dear to them, their love… their beginning.

Ava Sinclair continues to seduce and tantalize her readers. If you love sci-fi you will love this. Sci-fi erotica only Ava!! The writing is what you come to expect from the author. I have said it before I will say it again the writing is a masterpiece. We are transported to another galaxy, the writing is the allure. The spanking and discipline is just a plus the sex is not overpowering in the book. Everything aspect of the book is a work of art. I never get bored and am fascinated by the story. Can’t wait for more, it is beyond this world!! 5 stars isn’t enough!!

★★★★★ Alexis Alvarez @ Amazon.com “well-formed prose and steamy heat – loved it!” on September 27, 2016
Ava Sinclair writes her romance with well-formed prose and steamy d/s kink, punctuated with enough feminism to let you relax and enjoy the dominance. Take a trip with Iris to Trao-X39, a forbidding planet to which human women go when they run out of option on a dying Earth, as futuristic mail-order brides who get to choose their mates. Feisty and smart, Iris fights against a surprise twist: She’ll be given to the highest bidder, and things take a turn for the worse when she’s sent as a gift to a tribe of rough soldiers to be a bride for two brothers. The tribe is fierce and the brothers demand her absolute submission…in and out of bed. The sex and punishments combine in a way that Iris never expected to like, let alone crave, and she’s more than half in love with her new mates and her new life, even though she lacks power. But ugly politics and old enemies reemerge, and soon more than just her feelings are at stake – the lives of everyone she holds dear are in danger. It’s time for Iris to step up for herself and all the women of the tribe, and help forge a new future where equality and women’s rights are not just dreams of her past but part of a strong new generation.

I actually really enjoyed the spanking scenes the most (what does that say about me, I wonder?)…..I re read those the most, and man were they hot! The sex scenes were also really interesting, because it was double penetration in a way that I hadn’t ever read before, that also seemed doable IRL.

So, we start off with the heroine running away from her “Claiming Day” from her designated mate…..thereby embarrassing the fragile male egos that seem to exist in EVERY race–alien or human–and given to the hired “savages” i.e. the Trogarians to be their shared mate, given that the Trogarians have a low birth rate, and then mainly have male children. This is where the double penetration sex scenes come in, as well as the spanking.

Having already escaped one mate, and now being given to two as a shared mate…..the first thing Iris does is try and get out of it. That action didn’t work out so well, and the one who paid for it was her ass. And whole vaginal area. I didn’t think a scene from the latter could be as hot as it was…..but it was.

The most interesting thing in this for me was the growth of the heroine. I mean, obviously this is an erotic spanking/DD book, and she’s going to realize that she wants to be disciplined and spanked and play spanked by her mates, before, after, and during sex. But the character came from such a miserable place, that I think she didn’t realize things can always get worse. And it did, from the one person she had escaped from. But I don’t think she realized her actions would affect others, and when she did realize that, there was sort of a new growth? A maturity. The first time she ran/spoke out it was for herself, the second time was for everyone.

★★★★★ Renee @ Amazon.com “A dark sci fi that really heats up the kindle” on September 28, 2016
Another awesome book from Ms. Sinclair. This book is a little darker than most of her books but it is a great story. I really enjoyed reading this book. The ending was a quick twist that the reader never saw coming. Looking forward to more from this author.

★★★★★ Bookworm555 @ Amazon.com “A great continuation to The Alien’s Captive” on September 25, 2016
I was given a copy of this book by the author in exchange for an honest review.

I really like Ava Sinclair’s stories (I read for the story and not the scenes) and this sci-fi is a great addition to her line up. This book is a continuation of The Alien’s Captive and I would strongly suggest you read it first. The story picks up decades after The Alien’s Captive (where human women were being kidnapped and sold as slaves/pets to the Traoian Senators and men of influence and wealth until General Bron brings about the change that stops the abductions). Now with General Bron (now an ambassador) away from the planet, some Traoians want to return to the old ways. This time the girl is not kidnapped but things are not happening the way she was told when she volunteered.

The story is well written and the characters are fully described and fleshed out. I really liked that Iris stood up and voiced her opinion even though it could have earned her a punishment. I liked that all the main characters were given the chance to grow beyond their original philosophies. The author does a fantastic job of describing the Trogarian’s belief system (the All that Is). The story is enjoyable and I read it in one sitting. It is a great continuation from the first story.

★★★★★ Laurel @ Amazon.com “Awesome Sci-Fi Romantic Adventure by Ava Sinclair” on September 25, 2016
Another awesome book by Ava Sinclair who continues her journey into future space with space ships, humans and hot sexy aliens and meeting familiar friends from the previous book. This can be read as a standalone but to get a better understanding you will want to read The Alien’s Capture. The Trogarians are from a different planet with different morals and actions. The characters are deeply examined as to their emotions, feelings and opinions and vastly different from the well to do and the characters outside of the higher ups who are true patriots and defenders of the planet. Non consensual actions, spanking, violence, danger, romance and more. Fast paced adventure, hot sex and hunky men in this page turning book. I was given this Advanced Reader Copy by the author for an honest review and the thoughts and opinions are mine.

★★★★★ Megan Michaels @ Amazon.com “Beautifully orchestrated science fiction” on September 29, 2016
I love Ava Sinclair’s books and this one was no exception. If you love sci-fi– and,in particular, a sci-fi with spanking and sex–then this is the book for you! She is masterful at world building and transporting you into the planet. I was able to clearly see the planet and understood the nuances of their community. Iris is a complex woman and when given to two brothers, she is unsure that she will like the situation, let alone love them. But she quickly has feelings for them and sees that they are similar to Earth in that they don’t respect women enough to trust their judgment. It was entertaining and a good read, and I liked watching not only her transition but the two men changing their thinking with regard to a woman’s intellect and judgment. Again this is a beautifully orchestrated science fiction that immediately envelops you into the planet, the peoples, and their customs.

★★★★★ H. L. Savino @ Amazon.com “5 smoking hot stars!” on September 26, 2016
Super hot alien romance. Iris is an intelligent and beautiful human woman who comes to an alien planet to find a mate, only to have her rights trampled on. She fights back and is banished to a colony of “savages”. These giant warriors discipline her but also show her love and come to respect her. Super hot spanking and love scenes. And a cameo of Augustus Brom–star of The Alien’s Captive.