Bride to the Beast by Samantha Madisen 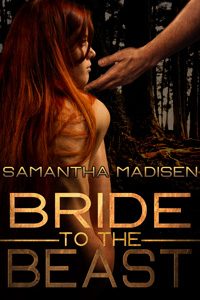 Thanred knows well that there is only one way to keep the lust-driven madness which afflicts every male of his kind from consuming him, and when he catches the scent of a human female who has been chosen as a bride for his tribe he wastes no time in ravaging her, wringing more intense, helpless pleasure from her quivering virgin body than she would have thought possible.

Though being rutted by Thanred left her utterly spent and satisfied, the idea of belonging to the huge, fearsome beast-man terrifies Royla nonetheless, and it isn’t long before she decides to make a run for it. Despite her best efforts, however, her escape attempt fails and she quickly finds herself held in place over his strong thighs as her bare bottom is thoroughly spanked.

Thanred’s plans for Royla include much more than merely using her to keep his lust at bay. She will be his mate and bear his children. But to end his exile and take back his place among his people he will need to master his little human completely, claiming her publicly in even the most shameful of ways and leaving every potential rival in no doubt that she is his and his alone.

Publisher’s Note: Bride to the Beast includes spankings and sexual scenes. If such material offends you, please don’t buy this book.

He tilted his head in the other direction. “Your Gods will not help you here,” he said. “Here you are mine. My vessel. My pet. You will do as I say. Do you understand?”

His finger had begun a slow circle around a very sensitive spot. He was twisting and kneading it, each sweep around the place sending tendrils of pleasure crawling through her whole body.

It caused her to arch her back and throw her head back, exposing her neck as she moaned. “Oh, Gods, yes!”

An instant later his palm landed on her backside in a sharp smack, tearing her from the building ecstasy. Her eyes popped open and she gasped as the pain laced together with the pleasure he’d just ignited inside her.

“Yes, Master!” she called out, her voice trembling.

This seemed to appease him. He placed his hand between her legs, his finger against the spot and began twisting it again.

Royla became quickly consumed by the desire that flamed through her. Her legs shaking from the awkward position, she swayed back and forth, grinding her hungry sex against his fingers.

Two short smacks connected with her rear again. More pain shot through her, sharpening the ache in her sex.

It took every ounce of her will to quiet her body and stay perfectly still. As his fingers explored her softness, moan after agonized moan came bubbling up from inside her, muffled by her closed lips. The pressure that began to build in her insides consumed her until she was on the brink of something… explosive.

His finger pulled away from the sensitive spot. He slipped it into her tender hole, the muscled digit gliding against her tight walls.

Royla shuddered. The pressure ebbed, ever so slightly. That brought no relief. Now she craved his touch again, prayed that he would find the spot and rub.

She shuddered and groaned as he did.

He leaned closer. So close that she could feel his breath on her cheek. “Now,” he whispered. “Release.” With that, he twisted the tender bud.

Pleasure erupted inside her, a hot and liquid bolt of it shot up her back. Her toes curled. She threw her head back, a scream bursting from her mouth as she succumbed to her lust.