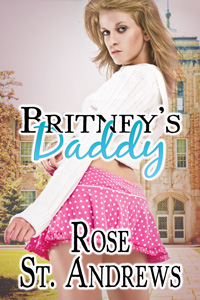 After attorney Britney Milan’s life is threatened due to her legal involvement with the mob, she and her husband, Tony, must take cover in witness protection. But Britney misses the thrill of the courtroom and her continual search for excitement frequently puts herself and Tony in danger. When she blows their cover yet again and they have to relocate once more, Tony decides on a drastic course of action. Since his wife has always looked much younger than her thirty-two years, this time she will pose as his eighteen-year-old daughter.

Britney knows she’s run out of options, so although she hates the idea, she agrees to call Tony her daddy, wear schoolgirl outfits, and attend Hillcrest Academy. She is shocked to discover that Hillcrest believes in old-fashioned discipline, but after being paddled at school the humiliation of her punishment never fails to jumpstart Britney’s desire for her husband.

When Tony discovers that a firm daddy is just what his wife needs, he sets out a new routine for her. Over the course of each week, she is first treated like a teenager, then a little girl, and then a baby. Despite her embarrassment, Britney soon finds that she has never been as happy or fulfilled as she is when her daddy is taking care of her. But can the couple stay hidden forever, or will Britney’s old life one day intrude on her new one?

She grumbled, but turned around, reached under her skirt, and tugged down her panties. Bending forward, she hoisted her skirt just enough. Her head turned at the sound of a chair being dragged across the floor. Tony had pulled one out and was taking a seat. She grumbled even more. He had the smuggest grin on his face.

“Start?! What the fuc-whoa,” she cried out, as he grabbed her, pulled her across his lap, and flipped her little school skirt up. “Anthony Caporale, just what the hell do you think you’re doing?”

“Britney, daughter of mine, our name is Milan, and you better remember it. As for what I’m doing, I’m exercising my parental right and responsibility by spanking you for your naughty act.”

She gasped, her eyes popping open wide, and then she shivered as she felt his firm right hand caress her poor bottom. Before she could voice an objection, he struck, and hard! Britney squirmed in his grip, but was unable to break free.

“Anthony, I am your wife, I’m a grown—owie—woman! You can’t do this to—ouch—me.”

“Huh, sure looks like I can. Young lady, little girl, you’ve been causing me no end of trouble these last few weeks. Well, this is the last straw.”

“Smoking? Ow! That’s the last straw? Tony, have you been drinking? Enough, let me go, or so help me-ouch!”

“What, what are you going to do, call Agent Grant? Oh, won’t that just be the most interesting conversation.”

Britney growled, but remained otherwise silent. He was right, what was she going to do about it? His physical strength was far superior to hers, and there was no way she was ending this with complaints. As she was a lawyer, she decided on another tact.

“All right, all right, you’ve—ouch—made your point. Owwiieeee, come on, Tony, this is silly. I’m your wife. Ouch—ow. Pleeeease, enough, this is embarrassing.”

He didn’t let up. That large, strong hand of his rose and fell like a metronome and just spanked, spanked, spanked! Tendrils of pain shot from her ass to her brain registering distress, and urging her to fight. Her intellect told her that was pointless; however, her body was not convinced. She bucked and heaved on his lap. Her legs split and kicked, as her arms clawed at his leg. All of it was in vain.

“Okay, you want this to end. Fine, point one: promise me no more smoking. Point two: you’re going to behave in public, and finally: no more lying to me. You read me, little lady?”

To her relief, he stopped. Easing her up off his lap, he moved her into a new position, sitting on his lap, and then he gently hugged her. She winced at her poor bottom making contact with his thigh, but the comforting was actually quite nice.