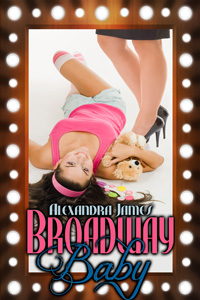 Shelby Bishop is accustomed to playing the part of Lily Prescott’s mom in a Broadway show, but when the nineteen-year-old actress turns up drunk on her doorstep, she finds herself taking on the role for real. After Lily leaves a note nervously asking Shelby if she can be her mama off-stage as well, Shelby decides that they are going to have a serious talk in the morning—one that will involve putting Lily over her knee and spanking her little bottom.

It is decided that Lily will live with Shelby so that she can be kept out of trouble, and Shelby soon learns that keeping little Lilly out of the cookies and keeping her walls free of crayon drawings is an all day job. But every day, Shelby makes sure to show Lily that no matter how much trouble she gets into, she will always be there, sometimes to spank her or put her in the corner, but also to hug her, cuddle her, give her bubble baths, and tuck her into bed at night.

Lily has never had a mother who really cared about her, and Shelby makes her feel safe and loved for the first time. Lily and Shelby do big girl things with one another too, and the intense, breathtaking pleasure is better than anything Lily has known before. But when Lily’s birth mother discovers the nature of her relationship with Shelby and hopes to use that knowledge to extort money from her daughter, Shelby knows she must help Lily break free of her mother’s control. Can Shelby help Lily be the adult she needs to be yet still keep her little girl?

A loud thud and curse brought Shelby from her thoughts and she hurried back to the living area. Stopping short she saw that her side chair was now on its side, literally and Lily was staring down at it, shaking her head.

“What do you mean, Lily Anne?” Shelby’s voice lowered as she took in the room noticing for the first time all the couch cushions on the floor in a line in front of the chair as well as the coffee table pushed to the fireplace.

“Well, I wanted to jump on the chair really high,” Lily began. “But it wouldn’t let me so I ran on all the cushions and jumped into the chair and then it let me.” Lily’s expression turned into a pout.

“It would only let me get one good jump so I decided to get more good jumps than that and jump on it like a trampoline. So I ran again really fast and jumped and tried to do that but I tripped and hit my knee. The dumb chair made me hurt my knee and I still didn’t get to jump on it really high.”

“That’s because furniture is not to be used as a trampoline, Lily Anne.”

“But it’s fun and I want to do it again!” Lily stomped her foot and glowered up at Shelby. “And the dumb old chair is just lying there and I can’t get it up again. And these couch cushions aren’t springy enough, see?” Lily began to bounce on the cushion closest to her. “It’s lame.”

Grabbing Lily mid jump Shelby turned the girl and gave her bottom a half dozen crisp swats. “Lily Anne, you do not jump on furniture.”

Lily sniffled and rubbed her stinging backside, “You’re a meanie. I wanna jump!” Lily demanded and once more began to jump on the cushion as hard and high as she could.

“Make me!” Lily countered sticking her tongue out at Shelby before putting her thumbs in her ears to join the tongue in her taunt.

Taking a deep breath, Shelby grabbed Lily by the arm and easily pulled her off the cushion and down the hallway. Entering Lily’s new room Shelby placed the girl into the open corner with a heavy swat. “Do not move.”

She then moved to the window and lowered the blinds to be sure of their privacy. “You are in a time out, Lily Anne, and you will stay there until I tell you it’s time to come out.”

“I hate the corner,” Lily turned and began to walk toward the door.

Shelby was next to her in an instant, “I have had enough of this attitude, Lily Anne.” Moving toward the bed Shelby sat down and easily pulled her across her lap.

“You had your chance, little girl. You have earned this spanking, Lily Anne. I care about you too much not to give you something you have honestly earned.”

Divesting Lily of her pants and panties, Shelby moved Lily so most of Lily’s upper body was supported by the bed. She raised her left hand and brought it down sharply on the upturned bottom in front of her. She didn’t spank Lily hard, but the swats were constant, and after about twenty of them Lily was limp over Shelby’s lap sobbing her heart out with a now rather pink bottom. Stopping, Shelby rubbed circles on Lily’s back before helping her return to an upright position. Opening her arms Shelby rocked Lily as she flew into her arms and onto her lap and tried to find a comfortable spot.

2014-09-15
+admin
Previous: The Commander’s Mate by Morganna Williams
Next: Troublemaker by Gracie Malling