Broken by Him: A Dark Sci-Fi Romance by Loki Renard 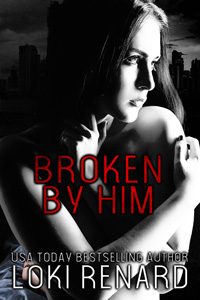 Grabbed off the street, locked in a cell, and falsely accused of a terrible crime, Tara thought they had taken everything they could from her. But she was wrong. Terribly wrong.

They plan to take her modesty, her dignity, and her free will itself. They intend to break her.

Breaking women is Doctor Mark Kilroy’s job and he does it well. Tara will be stripped bare, thoroughly humiliated, and punished harshly for the slightest hint of disobedience. Her body will be pushed to its limits with pleasure so shameful and intense it will shatter her ability to resist his demands. When Mark is finished, he will not need to force himself on her. She will beg for it.

But Tara is not like any other woman Mark has broken. Even as her body surrenders to his mastery, her mind refuses to yield. Worse still, he finds himself yearning to cast aside protocol, abandon his duty, and claim her for himself. When the time comes for him to complete his task and put Tara’s conditioning to the test, will her defiance end in catastrophe for them both?

Publisher’s Note: Broken by Him includes spankings and sexual scenes. If such material offends you, please don’t buy this book.

He pulled his fingers from her pussy and spanked her bottom hard enough to make her have to catch herself on her hands as the heat blazed across both her cheeks.

She straightened with pain, knowing she had made a mistake, but it was all too late. She was in trouble. He wrapped his hand around her waist, pulled her back toward the stool, and pushed her down over it so her stomach was against the padded top.

“Stay,” he commanded in tones she didn’t dare disobey.

He crouched next to her, reaching into his pocket to remove a set of Velcro ties. They wrapped around her wrists and ankles and he secured them to the legs of the stool so she was now tied to it, her bottom high in the air, her pussy and ass still very much on display.

He stood back and she heard his hand whipping through the air before it found her bottom. She cried out even before it landed, anticipating the hot flash of sensation, which was even greater than she had anticipated.

She cried out, unable to answer as he steadied her with one hand on her lower back and set about spanking her bottom long and hard, the stool making it impossible for her to wriggle or avoid any one of the many dozens of hard slaps that landed on her poor cheeks.

After a minute or two, she was sobbing, hot tears running down her face as she was punished. This wasn’t fair. How had he known what she wanted? He couldn’t have. He didn’t know her thoughts. Or did he? No. Of course not. That wasn’t possible.

“I’m sorry!” she gasped through her tears. “I’m sorrryy!”

“What are you sorry for, girl?”

His hand came down across her bottom again, fresh sting igniting her rear.

Her gasp came as he pushed two fingers back into her pussy, her sore ass having distracted her from the state of her sex until that very moment. She was soaking wet. His fingers pushed in easily, spreading the tight hole wide around his digits.

“Tell me what you want here, girl.”

Her hesitation earned her another slap to her bottom.

“Tell me, Tara, or you’re going to be a very sore, very sorry girl.”

2018-02-11
Chris
Previous: The Cowboy’s Princess by Jessica Belle
Next: Their Wild Pet by Rose St. Andrews