Broken by the Alien: A Dark Sci-Fi Romance by Loki Renard 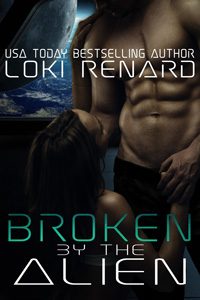 Her planet belongs to him. Her body will too.

I’ve been a slave since Earth was conquered, but today a powerful Rathkari commander has singled me out. He’s brought me aboard his ship and made sure I’m bathed and pampered. Now this huge, fearsomely sexy alien warrior plans to do absolutely anything he wants with me.

I hate him and his entire race, and I fight him with everything I have… at first. But before long, I’m moaning, writhing, and blushing with utter shame as he forces one savage, shattering climax after another from my naked, helpless, tightly bound body.

Soon I’ll surrender completely. Then he’ll claim me, use me, and breed me hard and often, and I’ll take everything he gives me and beg for more. He’ll have broken me, and I’ll know it.

Publisher’s Note: Broken by the Alien includes spankings and sexual scenes. If such material offends you, please don’t buy this book.

He has perfected the art of spanking me, making my ass feel like it’s about to burst into flames. It hurts, but more than hurting, it makes me hot and wet. I press my thighs together to try to hide my arousal, but I know he’s already seen it. He misses nothing, and he is starting to know me so well it is frightening. Karlo is incredibly intelligent, that much I have gathered, and since he took me captive, he’s been treating me like some biological puzzle he can fuck.

He spreads my cheeks, his powerful hands making me vulnerable in my most tender places.

I do as I’m told. What choice is there?

His eyes are there, between my thighs, running over the soaked lips of my sex. I get so wet when he touches me. I can’t help it, even when I try to. I try to think of things that turn me off. I think of the fields I toiled in for all those years. I think of the cruelty of the Rathkari. I focus on all the hatred I have for him and his kind—but when his finger traces down the wet seam of my lips, I let out a soft moan. I am a traitor to all humanity, and to myself.

He is doing something above me. I barely pay attention, caught in my own thoughts—until I feel what is fast becoming the familiar sensation of cool lubricant against my bottom hole. He works it in with short swirls of his finger, making my anus submit.

At first I think he is just doing it to embarrass me more, but then I feel something metallic there. Some kind of… I try to look, but I can’t see. I can feel though. Something smooth and sort of rounded, slipping inside me a little bit at a time, stretching me wider than his finger does. When it settles inside me, a slimmer portion allows my anus to relax a little, flared base holding the contraption in place. I am stretched inside. I can feel it moving as he takes hold of the base and twists it slowly back and forth.

“This is a reminder,” he says. “If you misbehave while we’re out, you will be punished here. You’ve had a probe in your ass before. You’ll take my cock if you don’t do as you’re told.”

The threat makes me blush furiously. I know he’ll do it. I bet he’s going to do it anyway one day. It’s the sort of thing he’d like to do, shame me with his cock, force my body to do things it was never really meant to do. Everything about him is a perversion.

“Do you understand, Era?”

“Yes,” I hiss between clenched teeth.

His palm covers my left cheek, rubbing and making the plug jiggle at the same time.

“Should I do it now,” he muses, more to himself than to me. “Fuck your tight little asshole, then plug you up and take you out while you still remember who you belong to.”

“No? You already know who you belong to?” His fingers curl in my hair and pull my head up and back, making me arch for him. “Tell me, Era.”

He is looking down at me, his gaze finding mine. There’s only one answer he will accept. The same answer I really don’t want to give.

His fingers tighten, making the roots of my hair sting. His other palm goes to my bottom. I know what’s going to happen if I don’t say it. He’s going to punish me. He’s going to take me hard. He’s going to fuck my ass, and all I have to say to avoid all of that is that I’m his. It’s just one word, so why won’t it come to my lips?

He’s waiting. Am I going to break? Can I say it?

2018-04-07
Chris
Previous: Her Gilded Dragon: A Norse Warrior Romance by Susannah Shannon
Next: Tamed by the Alien by Adrienne Blake