Brought to Heel: An Alpha Shifter Romance by Delta James 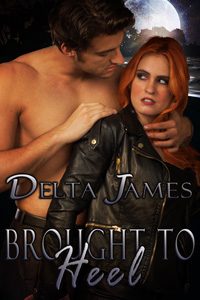 Before he claims his mate, she must be brought to heel.

Skylar Owen is not used to taking orders from anyone and the last thing she wants in her life is an alpha who will demand her submission, but her world is turned upside down after a band of rogue wolves attacks her small, all-female pack. Ordered to disband her pack so that she can be matched with a mate, Skylar defies the Ruling Council, only to be hunted down and captured.

Though he can tell Skylar will be trouble the moment he sets eyes on her, Dylan Grainger knows how to tame a wayward woman, and it isn’t long before the beautiful, feisty redhead is tearfully promising obedience as her bare bottom is soundly spanked. But Dylan quickly realizes that Skylar is much more than just a headstrong female in need of an alpha’s firm-handed correction.

With each passing day, he grows more certain that she is his mate, and he knows that soon he must claim her, mark her, and take her hard and thoroughly. But will she resist her instincts, or will her body’s response to his bold dominance leave her in no doubt that she belongs to him?

Publisher’s Note: Brought to Heel is a stand-alone novel which is the first entry in the Wayward Mates series. It includes spankings and sexual scenes. If such material offends you, please don’t buy this book. Also note that Brought to Heel shares its setting with Adaline Raine’s previously published books Marked by the Alpha and Rules of the Pack, and it was written only after receiving Adaline’s permission and support.

“Do you think if I let you up you can finish undressing yourself and go stand in the corner like I told you to before you got your bottom blistered?”

“But you’re done spanking me, right?”

“Not by a long shot. That spanking, mate, was for not being an obedient mate and going to the corner when you were told to do so. When I let you up, I want you to go stand there and think about what got you put in that corner with nothing but the sting in your tail and the knowledge that your abysmal behavior downstairs garnered you your first encounter with my belt.”

“No, Dylan. Please, no. I hate being spanked with a belt or a strap.”

“Ioan mentioned it was an effective deterrent for you when used properly. He also mentioned that in addition to a hard hand and a good leather strap or belt that you tended to behave best and seemed the most at peace and happy when your alpha was mounting you long and hard on a regular basis. Just as I will see to your discipline, cariad, I will see to your bedding as well.”

Dylan began to rub her bottom soothingly and erotically. He could hear and feel her breathing and state of arousal increase dramatically. He slid one finger between her punished ass cheeks, then ran it down between her legs. He fluttered his fingers against her sex but she did not open herself for his exploratory touch.

“Skylar, part your legs for me.” He waited to see if she would comply. “Do you need me to spank you before you’ll do what you know you want to do? Cariad, be a good girl. Don’t you want just a bit of pleasuring before I take my belt to you?”

“Please, Dylan. I’ll open my legs for you if you promise not to use your belt.”

“No, Skylar. I let you talk me out of using my belt on you earlier today and it’s brought me nothing but grief. I’m not going to ask you again. So now I’m telling you. Spread your legs for me.”

He watched her struggle with herself. Part of her wanted desperately to defy him, but the part that seemed to be winning, wanted his touch in her most feminine place. Finally, arousal won over temper and pride. He was glad to see that it did. She spread her legs just wide enough for his hand to part them and her outer lips. He dragged his fingers past the opening to her velvet sheath, which was dripping with need. He picked up just enough of her natural lubricant to massage it into her engorged clit. He rubbed that swollen nubbin in circles and grinned as her hips began to grind against his lap.

His cock struggled to break free from his jeans. His knot was forming rapidly and he would either have to focus on suppressing it or disciplining Skylar. As painful as it would be, Dylan would endure this knot without the benefit of burying it in his mate, but he also knew that in the future he would knot and tie her to him on a frequent basis. He allowed her to feel the knot. He wanted her to know that as angry as he was, he still desired her above all else.

Dylan continued to pleasure her by rubbing her clit. Skylar tried to suppress a moan of pure desire. It had been far too long since a man’s hands had brought her pleasure. She could feel her heartbeat and breath quicken. The wetness that Dylan was using to play with the bundled nerves between her legs continued to increase. He kept her on edge by every so often reaching past her clit and dipping back into her pussy—never quite fingering her, but just gathering the slickness he needed to continue to pleasure her. Skylar tried biting her lip and the inside of her cheek, anything to keep from focusing on the sensations his skilled hand was inflicting on her.

“No,” she moaned, shaking her head. Dylan didn’t stop and continued to caress her, not only to bring her pleasure but to remind her that her responses, her orgasms, her everything were no longer her own, but his to command. Skylar could feel her control slipping and finally gave in to the rush of her orgasm, crying out as she did so.