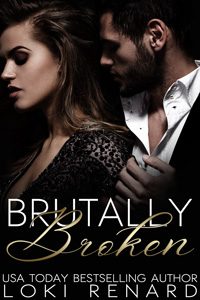 I bought him. Then he taught me what it means to be owned.

When I bought Vadim I intended to use him and dispose of him when he was no longer useful, but he takes orders from no one, and within minutes I was forced into humiliating surrender.

He didn’t just overpower me. He bared me completely, and then even as I fought and swore and screamed the hulking brute held me down and punished me so thoroughly I begged for mercy.

But Vadim doesn’t do mercy.

He has made himself my master, and every time I dare to disobey I end up sore, sorry, and shamefully used. I can pretend to be in charge, but I know he won’t stop until I’m broken.

“How dare you!” I declare at the top of my lungs. “You ungrateful brute! You simple animal! You disgusting…”

My tirade is cut off abruptly when he grabs me, laying those big, brutal, tattooed hands on me. I scream for help, but there is nobody here willing to go up against a brutal Russian gangster. Just a couple of skinny little shop assistants, and a store manager who looks horrified as Vadim hauls me bodily across the shop floor and plonks down on a couch where people usually sit to wait to give their opinions on the clothing people have tried on in the changing room, except this time the clothes are coming off on the shop floor. And they’re mine.

He tugs my skirt right off my ass, slides it along my stockinged thighs and lets it fall to the floor. I am shrieking for help, but nobody is moving as he holds me down over his thighs, wraps an arm around my waist, and starts striking my ass with the flat of his palm.

“You have no respect,” he grunts in that Russian accent of his. “You treat people like dirt. You will learn manners now.”

His palm blasts across my ass, sending bolts of heat and pain through my body. I shriek at the top of my lungs, but it does nothing except herald yet more slaps that land just as hard and just as mercilessly.

I don’t know how to respond to this. My body is reacting with desperate scrabbling, kicking, and writhing, which does precisely nothing to help me escape his grasp. He has me locked down in this humiliating, submissive position, which leaves me no option but to take his rough punishment.

“Vadim! I will return you for this! I will send you to the ring! I will…” I burst into a scream as he slaps me again and I suddenly realize that he was being gentle before now. He is so fucking strong, and right now he is so fucking mad. I briefly consider whether or not it was a mistake to call him an animal, but more swiftly decide that it was a bigger mistake to bring him out of that basement at all. They warned me he was violent and aggressive. They tried to tell me that he would turn on me, but did I listen? No. And now I am being beaten, my ass stinging and aching with every hard slap he lands on my cheeks. My underwear is still up, thank god—but no sooner do I think that than he grabs it in that huge hand of his and pulls it down. I hear the expensive fabric tearing, and know that those panties are ruined forever, as is my ass, which now receives the full power of his palm.

My cries begin to become more than shocked shrieks, they start to venture toward screams and only then does he stop, when I am crying and begging and wailing. He holds me there and he makes me deal with the pain he has unleashed on me, a sore heat that keeps burning even though the slaps have stopped falling.

“You will show me respect, woman,” he growls down at me, his big hands wrapped around my left thigh and upper right arm.