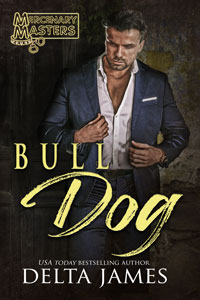 the collar because she is his. She is his because her body knew its master.

The moment Olivia Miles resorted to fighting dirty in a fencing match, Lord Nigel Pederson decided to teach her a shameful lesson, but as her quivering bottom reddened under his punishing hand the arousal pooling between her thighs made it clear she needs to be mastered completely.

She will wear his collar, obey his every command, and await his permission to speak, and she will be sent to bed each night even more sore and thoroughly used than she was the night before.

She is his now,

and he is going to leave her in no doubt of it.

Publisher’s Note: Bulldog is a stand-alone novel which is part of the Mercenary Masters series. It includes spankings and sexual scenes. If such material offends you, please don’t buy this book.

The doors opened and for the second time today, she gasped in amazement. The room was huge, opulent, but not gaudy, and filled with light. He led her through the comfortable seating area, past the sumptuous bed and into a small, private dungeon. There was a spanking bench, a St. Andrew’s cross against one wall, a large massage table, and several overhead hard points for suspension play.

Nigel walked over to the spanking bench. “Discipline will always be given with you completely naked at home and at least partially naked elsewhere. Take off your clothes and hand them to me.”

He watched Olivia remove her clothes and obediently put them in his hand.

Sitting down, Nigel took her arm and gently drew her over his lap. “I believe it was a count of twenty.”

She could see and feel his sizable erection as he made her comfortable over his hard thighs. He ran his hand over her naked ass, his hands feeling the smooth skin. Nigel lifted his hand, setting it down on the back of her leg, trailing his fingers up between her thighs and tickling her labia, which was swelling and softening with her increasing arousal.

“Do you understand why you’re being punished?”

“Because I broke protocol… and you need the DSI to think you have absolute control over me.”

His hand came down in a punishing strike that lit a fiery sting where it landed. Over and over he spanked her, not stopping or relenting to allow her to get used to his rhythm. After the first couple of strikes, she found herself slipping into that dreamy place that few had ever been able to give her. Everything but the strong, steady tempo drifted away. Olivia could feel herself simultaneously relaxing and becoming wildly aroused. All too soon, his hand came down a last time.

“You can be such a good girl when you want to be. You did very well,” he said soothingly as he ran his hand back between her legs and found her wet. He reached up and rubbed her swollen clit and she moaned. “A very good girl.”

Nigel helped her up and then led her back into the sleeping area.

“Up on the bed, Olivia. Hands and knees,” Nigel commanded.

She complied and all but collapsed in a puddle of need and desire when he reached under her body to cup and then squeeze her breast, ending in a hard pinch to her nipple—a caress she could feel sending a surge of desire racing through her entire body. Nigel pulled her back to the edge of the bed, stepping between her spread legs. She heard the zipper of his fly whispering open, felt his cock nudging the opening of her core. In another circumstance with another man, she might have tried to impale herself on the rock-hard staff that jutted out from his body, but she feared all that would result was another spanking and not getting what she wanted… and needed.

He gripped her hips. “You can come as often and as loudly as you like, unless I tell you differently,” he crooned.

Her body trembled in response to the quiet, confident power in his voice. She was close to a climax and he’d barely touched her sexually. She realized that Lord Nigel Pedersen had a control over her that had nothing to do with a contract.

Nigel thrust into her in one long, hard stroke, grunting as he did so. Olivia cried out as his cock stretched and filled her, almost collapsing from the power of her orgasm.

2021-01-10
Chris
Previous: Bound by His Command: A Dark Billionaire Romance by Piper Stone
Next: Taken by the Mercenary by Stella Rising