Buying His Mate by Emily Tilton 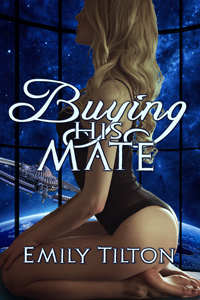 In the years since the rich and powerful abandoned their planet, society on Earth has all but disintegrated. But there is one thing that those who left Earth behind still need from their old home, and in return for sustenance and protection the remaining humans of Earth have offered their women as mates to those who wish to claim them.

Despite her best efforts to avoid her fate—efforts which only earn her a hard, bare-bottom spanking—when the time for her inspection arrives eighteen-year-old Gretchen soon finds herself stripped naked for a humiliating, intimate examination in front of an audience intent on evaluating her as a potential mate.

Martin Lourcy was attracted to Gretchen from the moment he set eyes on the beautiful young woman, but it is her body’s helpless arousal during her examination which convinces him that he must have her. But Martin wants Gretchen not only as his mate, but as his something more, something his society no longer allows a man to have. He wants her as his wife.

After buying the right to take Gretchen home with him, Martin marries her in secret, but soon he is faced with an unexpected dilemma. Though he is wildly in love with his new bride, his position affords him the power to use her in any way he desires and his lust for her pushes him to dominate her ever more harshly. Yet when he strives to treat her gently, she rebels, and he is forced to wonder if everything his society taught him was wrong. Could Gretchen truly not only want, but need her husband to master her and take her as hard and as often as he sees fit?

“Stand up, now, wife,” Martin said. Gretchen obeyed, and he spread his thighs and put out his hands to her. She took his hands, and he could not imagine anything that might move him more than the sight of his wife’s little hands in his big ones as he pulled her closer, until she stood between his legs, almost up against him, with her little face just a bit higher than his.

He moved her hands to his shoulders, running his eyes up and down the thrilling sight of his sweet girl in her lacy underwear, loving the exciting view the tiny panties gave him of a hint of her maiden pussy. He looked into her face and saw her blushing uncertainty as she seemed to understand that the way her new master, her new husband, looked at her had lust at its foundation.

With his left hand he cradled the back of her head, and drew her face gently to his, so that he could kiss his wife for the first time.

“Oh,” Gretchen murmured, just before their lips met, and then, “oh,” again, after Martin had kissed her tenderly, but also so as to command that her mouth open to his, and that she yield herself to him in the kiss as she had yielded in her words.

Martin moved his right hand to her little bottom and began to caress her there, holding the little cheeks and squeezing them gently, parting them and running his middle finger along the little lacy strip that covered his girl’s charms so very inadequately.

Now Martin used that same middle finger to work his way inside her panties, and, as he kissed her mouth again, to claim her pussy and her anus with his touch. He took his left hand from her hair, and, moving Gretchen gently backward just a little, put his fingers boldly inside the lacy bra, so that her could play with her strawberry nipples and make her sigh again.

“It’s almost time for the lesson table,” he said softly.

“Do you want to know what I’ll teach you?” he asked teasingly.

“I’m going to teach you how to cry out when I make your pussy feel pleasure.” He looked up at her; she had closed her eyes, and he did not think he could ever get enough of the sight of her helpless, enforced pleasure as he had his way with her between her legs and inside the lacy bra.

2015-06-05
+admin
Previous: His Naughty Little Human by Rose St. Andrews
Next: Rules of the Pack by Adaline Raine