Callie Mae and the Marine by Stevie MacFarlane 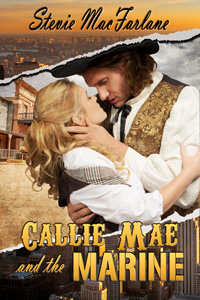 After he is wounded during his final tour of duty with the Marines, Morgan Whittaker returns home to a life in shambles. Knowing that their marriage is beyond repair, his wife uses her connections as a scientist at a top-secret government lab to offer Morgan an opportunity to start over in not only a new place, but a new time as well. Believing that he has nothing to lose, Morgan agrees, and soon enough he finds himself walking the dusty streets of a small Kansas town in the year 1880.

It is there that Morgan meets Miss Callie Mae Walker, the feisty preacher’s daughter who has taken it upon herself to run the local saloon, much to the consternation of her father and the townsfolk. Callie Mae is beautiful, sassy, and in desperate need of a firm hand applied to her bare bottom. Morgan decides that he might just be the man for the job, and before long he takes the little hellcat over his knee for a sound spanking.

Callie Mae is not one to be tamed easily, and his chastisement provokes her to take even greater risks with her safety at the saloon. But Morgan is no longer the all-but-broken shell of a man he left behind in the twenty-first century. In this time and place, he is the tough, bold fighting man he once was, and he’ll be damned if the girl he loves is going to get herself killed because she didn’t have her backside heated properly.

“What are you going to do?”

“I’m going to do what I came up here to do before I got side-tracked by those pouty nipples and your pretty pussy. I’m going to spank your sassy little ass.”

“No, Morgan, please,” she begged as he sat on her bed and pulled her across his thighs. “You can’t!”

“I guess we’ll see about that, won’t we,” he said sweetly. “I’ve been longing to do this ever since I found you teetering on that crate. You’ve pushed every button I have and then some, but tonight you went too far. What did I tell you about drawing that gun?”

Smack! “Were you going to use it? Would you have shot Ty?” Smack!

“Are you deliberately trying to get yourself killed?” Smack!

“No, I’m not,” she hollered back, stunned at the amount of pain she felt from just three slaps.

“Well, you could have fooled me,” he continued.

His hand began to fall in measured beats as Morgan got down to business, spanking her in earnest. Over and over it fell, as her feet kicked madly. Finally Morgan reached down, pulled off her boots, stripped her pants off and trapped her legs beneath one of his.

“It’s time you learned who’s going to wear the pants in this family,” he informed her crisply as he set fire to her bottom. “I won’t have my wife making a fool of me in front of the entire town. You want to own a saloon, fine, but you won’t run it the way you are now. It’s too dangerous for you and those girls down there,” he growled, placing a slap on her ass every time he paused for breath. “Are you listening to me?”

“Good, because I don’t want to have to repeat myself,” he stated, spanking her five times in rapid succession. “I want a home and a family, babies, in fact lots of babies, and their mother is not going to spend her evenings at a saloon. She’ll spend them making love with her husband. If I have to spank you every night and twice on Sunday, I will, but the only one who’s going to see you in sexy clothes is me. Got it?” he asked, lifting each cheek and delivering five slaps to the underside of each one.