Calling the Plays by Marlee Wray 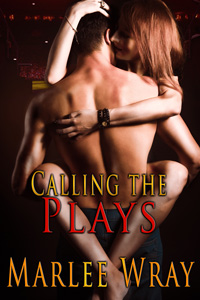 Though shy, introverted physics professor Meghan Marshall would never have expected to catch the attention of a guy like Dean Ulrich, she is intrigued when the buff, handsome football coach offers to help her prepare for a major presentation. They hit it off right away and things heat up quickly, but Meghan soon discovers that Dean is an old-fashioned man who will not hesitate to take a misbehaving woman over his knee for a bare-bottom spanking when he feels it necessary.

Despite Meghan’s reservations about surrendering herself completely not only to Dean’s bold dominance in the bedroom but to his firm-handed discipline as well, Meghan cannot deny her body’s response to his strict correction and masterful lovemaking. But as their relationship blossoms into a passionate romance, will their bond prove strong enough to survive both idle gossip around campus and the malicious lies of a vindictive woman set on tearing them apart?

Publisher’s Note: Calling the Plays includes spankings and sexual scenes. If such material offends you, please don’t buy this book.

“Are we done with the punishment? Please say yes,” she said as he continued to rub that most sensitive nub of flesh.

“No. If you can carry on a normal conversation, I haven’t spanked you hard or long enough.”

“But I’ve been sick,” she countered.

“You were, but you’re obviously not now.”

He continued with the spanking until she started to really protest, her breathing shallow, her eyes stinging.

“Cry if you need to,” he said, pinning an arm in her lower back so she couldn’t move away.

Then he spanked her even harder than he had been. She did cry, but her body also got confused. Half the time she tried to escape, but the other half she raised her bottom up, as if offering it to his hand for punishment.

When he rubbed between her legs, she went wild, seeking release.

He slid a hand under her, so both hands were rubbing and penetrating her. Then a hand moved to her cleft, opening her cheeks. He swirled a finger around her ring.

She bucked. She didn’t want… but then his finger was inside, and heat seemed to burn right down to her clitoris and pussy.

She moaned and twisted her hips. He added another finger, stretching her open in back. She felt powerless to stop him. The only thing that mattered was attaining the release of so much tension.

When the orgasm hit her, all her muscles clenched and relaxed over and over in the most profound way. Even her bottom hole pulsed and spasmed around his invading digits, in perfect sync with her pussy.

He removed his hands while she was still recovering. He turned her so that her upper body was supported by the bed, but her legs were hanging down. Then he entered her in one hard thrust.

Her body, still aroused, continued to respond. Even when he banged against her aching ass, she didn’t try to escape. She let him use her, pushing back against him when his grip tightened on her hips.

The sound he made when he came seemed to resonate through her soul. She might be a brilliant person with a promising career out in the regular world, but with him… She might not be in physical chains, but she was enslaved all the same.

He dropped forward on his hands, his hot body heating her damp back. He kissed the side of her face, undoubtedly tasting tears that were still leaking from her eyes. She didn’t know why she was still crying. It had just been so intense.

2017-11-05
+admin
Previous: The Dragon Lord’s Pet by Loki Renard
Next: Her Old-Fashioned Husbands by Emily Tilton