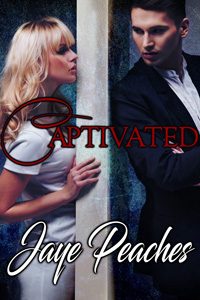 Waking up in an unfamiliar bed in a room she doesn’t recognize is disturbing enough, but Anna Hadley becomes truly alarmed when she looks into the mirror and sees the face of another woman staring back at her.

Her confusion intensifies when a man—who apparently believes she is his wife—suddenly knocks on the door and scolds her for spending so much time by herself in the bedroom. To top it all off, it quickly becomes clear that the man has some very specific, very old-fashioned ideas regarding the proper way a husband should deal with a disobedient bride.

In spite of everything, the threat of having her bottom bared for a sound spanking arouses Anna deeply, and even as she searches for clues that might explain what happened to her, she cannot help becoming more and more attracted to her supposed husband.

It isn’t long before she earns herself a punishment, and when he reddens her backside and then takes her hard and thoroughly she is left spent and satisfied. But knowing she could find herself back in her own body at any moment, can she dare to fall in love?

What happened next was swift, the kind of brisk spanking she’d often wished Darren would try out. As she leaned over him, her bottom lifted, he lightly smacked an ass cheek with his free hand. She jolted, but managed not to bite him.

She coiled her tongue around his rod, working harder.

On the third smarting blow, she moaned. Her nose was close to his balls and the head of his cock tickled her throat. The sting of his smacks deepened, heating her ass.

She bobbed her head frantically, still directed by his anchored hand in her locks of hair. With her orgasm rekindled, she parted her legs and supported her weight with her arms planted around his thighs.

Intentionally, she’d afford him access to her pussy. She expected him to finger it. She was wrong. The slap swooped up between her legs and landed on her pussy. His cock dropped out of her mouth as she let out a cry of surprise.

The quality of his voice was perfect. She lowered her lips and kissed the swaying member, trapping it in her mouth.

“Good. Hold still, while I punish this pussy.”

Punish? He meant it differently—he spoke with a soft edge to his voice, almost sultry and seductive.

“I want you to come,” he ordered breathlessly.

“When I come, so will you,” he rasped before letting loose another battery of smacks.

The heat in her pussy set off a wave of spiraling clenches. Her jaw ached as much as her empty vagina. She sucked her cheeks in hard and drew him deep into her mouth.

2017-03-19
Chris
Previous: Breaking in Bella by Isabella Laase
Next: Serving the Immortals by Katie Douglas