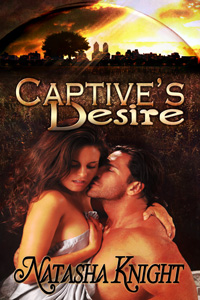 Olivia has spent years training to hunt and kill the dangerous savages who live outside the dome which protects her city, and she stands ready to carry out her mission with pride… until the day she is shot down and her life is changed forever.

Pulled from the wreckage by a man unlike any she has ever seen—a massive, gruff, yet strangely handsome brute who is not afraid to bare her bottom and spank her soundly to compel her obedience—she is brought into the midst of the people she once sought to wipe out, and her rescuer becomes both her captor and her protector.

From the instant he sets eyes upon her, Hayden is certain that there will be a special place in his heart for Olivia. He knows the struggle she will face as she breathes the clean, free air outside the dome and the drugs in her system wear off, leaving her exposed to desires more powerful than she can imagine—desires that he will be more than prepared to fulfill when she is ready.

As the days pass, Olivia grows more and more disturbed by what she sees around her—husbands and wives, children and families, all healthy and unharmed by the supposedly poisoned air. Far more disturbing, though, are her growing feelings for Hayden. She finds herself wanting him in a way that she cannot understand, and her need for him grows stronger with every passing hour. She knows that soon she will ask for him to take her, and that when he is finished it will not be long before she kneels at his feet, blushing with shame while begging for more.

“Lie across my lap.”

It was as if those words alone fired her insides.

When she remained standing a moment longer, he gestured to his lap without offering help. Instead, he watched as she came closer and awkwardly situated herself so that she could lower herself in some way that wouldn’t utterly shame her. She realized quickly, however, that that was an impossibility. She placed her hands on his thigh as she lay her torso across his lap, then inched forward, still trying to hold on to him for support.

“Hands on the floor, Olivia,” he said.

Shame turned her face red as she reached for the floor, but she determined she would not cry. With her hands on the floor like this, she had to almost move to tiptoe, which forced her to lift her hips higher. She kept her buttocks and thighs tightly together and looked straight down at the floor.

His big hand came to rest on her cheeks and she tightened even more.

“There are ways to make you unclench, Olivia,” he said, caressing her. “I can guarantee you won’t like them.” His hand was still gently circling, his attention to her bare, vulnerable bottom so incredibly arousing even as she knew pain was next on the agenda. “You have a gorgeous ass and I’ll be honest, I’m very much looking forward to spanking you, but I won’t begin until you’ve relaxed your muscles. I’ll give you just one moment to decide if you need help with it.”

“You’re awful,” she said, still refusing to look at him.

“I don’t think you believe that,” he said, his hand swiping between her thighs as soon as she softened her muscles. “In fact, I think some part of you quite enjoys submitting to me.”

She was about to shoot a smart remark at him when the flat of his palm smacked her ass hard.

“Ow!” It came out more as a squeak than anything else.

“I’m considering maintenance spankings, just to get you accustomed to my ways,” he said, ignoring her squeals and draping a leg over hers when she tried to wriggle away. “I think, in fact,” he continued as he spanked her buttocks, “you’ll find yourself anticipating those nights.”

2013-07-15
+admin
Previous: Obediently Yours by Bella Jackson
Next: His Naughty Bride by Chula Stone