Captured and Claimed: An Alpha Shifter Romance by Delta James 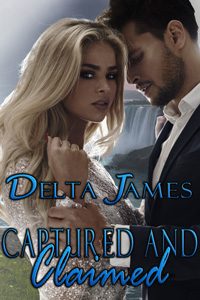 She never wanted to be a wolf. That won’t keep her mate from claiming her.

Taken captive, held prisoner, and turned against her will by the leader of a rogue pack, Shannon Livingston was just about to be sold at auction. Then an alpha wolf decided she belonged to him.

The moment James Norris sets eyes on Shannon, bare and on display yet still fierce and proud, the former special-ops agent knows the beautiful spitfire is his mate. Disobedience quickly earns Shannon a sound spanking, and despite her fury at his bold dominance, her helpless arousal is undeniable as she is claimed hard and thoroughly with her well-punished bottom still burning.

But when another band of wolves attacks the auction before James has time to put his rescue plan into action, mistrust born of harsh experience leads Shannon to seize her chance to escape. When her mate tracks her down, will she remain defiant or surrender to her instincts at last?

Publisher’s Note: Captured and Claimed is a stand-alone novel which is the eighth entry in the Wayward Mates series. It includes spankings and sexual scenes. If such material offends you, please don’t buy this book. Also note that Captured and Claimed shares its setting with Adaline Raine’s previously published books Marked by the Alpha and Rules of the Pack, and it was written only after receiving Adaline’s permission and support.

Shannon struggled. She wasn’t the least bit afraid. But she was wildly aroused and not just from the aphrodisiacs rubbed on her skin earlier. Those had worn off long ago. It was this man who called himself James Norris, and believed himself to be her mate.

Sinking her teeth into his calf muscle and hearing him cry out in pain was most satisfying. But she wasn’t prepared for the increased strength he would put into the blows being delivered to her upturned bare bottom.

Truth be told, it wasn’t the only feeling she was unprepared for. The way he growled, the energy she felt rolling off of him called to her in a way she had never experienced before. She had been mortified that when she tried to break free, his being able to contain her efforts only further increased her arousal.

What was worse was that James’ spankings hurt more than deMoncada’s had. They also called forth a deep, aroused primordial response… her nipples were as hard as diamonds and her pussy was producing an abundant amount of her slick feminine essence. Shannon was certain she would be well lubricated for him to be able to shove the large, granite-like prick she could feel straining to get free up inside her. She yearned to feel him stroke her with its length and girth.

Shannon barely had time to catch her breath between the swats that had quickly lit a fire on her backside and a different kind of fire deep within her. She feared that he could sense both and meant to see them both well attended.

“No! You are going to listen to me and behave.”

“You won’t and when I’m done with you, mate, you won’t even want to try. I’m sure deMoncada spanked you, but he never disciplined you as you should be by your mate. After I make you submit to your spanking and teach you not to challenge me or any other alpha male, I’ll make sure that you feel the full depth of my ability to conquer and tame you.”

James continued to spank her. The harder she struggled, the harder he spanked.

“I can do this longer than you can, mate. And if I can’t, I’m willing to bet a few stripes from my belt will bring you around quick enough.”

Shannon realized he had no intention of stopping until she yielded.

“Will you?” he asked in an even, reasoned tone of voice.

“Yes,” she said as she started to cry.

“Even the most rudimentary training would have taught you how to answer your mate when he’s paddling your backside. Yes, what?”

His hand moved down to the tender spot where the lower curve of her bottom joined with her upper thigh, causing her to howl in indignation and pain.

“Want to amend that tone of voice, sweetheart?” he said sternly but with little rancor in his voice.