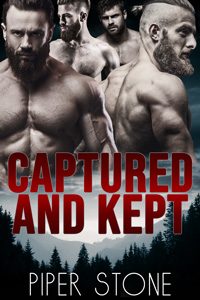 She went looking for cavemen. The brutes she found were much less civilized…

Since her career was knocked off track in retaliation for her efforts to expose a sinister plot by high-ranking government officials, reporter Danielle Carver has been stuck writing puff pieces in a small town in Oregon. Desperate for a serious story, she sets out to investigate the rumors she’s been hearing about mysterious men living in the mountains nearby. But when she secretly follows them back to their remote cabin, the ruggedly handsome beasts don’t take kindly to her snooping around, and Dani soon finds herself stripped bare for a painful, humiliating spanking.

Their rough dominance arouses her deeply, and before long she is blushing crimson as they take turns using her beautiful body as thoroughly and shamefully as they please. But when Dani uncovers the true reason for their presence in the area, will more than just her career be at risk?

Publisher’s Note: Captured and Kept includes spankings and sexual scenes. If such material offends you, please don’t buy this book.

“We’re just beginning, little sunshine,” Wolf half growled as he settled behind her, gripping her hips.

Bronco slid the tip of his cock up and down her pussy, his eyes shimmering in the dim lighting. “You ready for me, baby?” He slipped the tip past her cunt lips, wiggling.

“Uh-huh,” she muttered, sliding her hands up the length of his chest.

A slight snicker slipped past Wolf’s lips before he bit down on her shoulder and yanked her down, forcing Bronco’s cock inside.

“Ride me, baby. Hard.” Bronco’s words were guttural, husky. He kept his hands on her breasts, kneading her soft skin as she did as she was told, rocking forward and backward.

The angle was perfect, stealing her breath and igniting the fire. Dani powered up and down, her ass slapping against his legs. She was panting and laughing, taking every inch of his throbbing shaft.

Wolf dragged his tongue all the way down her spine, chuckling darkly as he slid his fingers along the crack of her ass.

One, two, then a third finger was placed inside her asshole. Tensing, Bronco eased her forward as Wolf drove his fingers all the way inside.

“Oh, God!” There was no doubt a cock would fill her most forbidden hole. She continued riding Bronco as the slice of pain quickly shifted into raw ecstasy. “Fuck me. Please.”

“I plan on it.” Wolf replaced his fingers with his cock, pushing inside her asshole an inch at a time.

Her body shaking, she opened her mouth, issuing a silent scream, willing her muscles to relax and accept it. His cock was so thick, filling her utterly. “I…” Unable to speak, she shuddered, her fingers clinging to Bronco’s chest. She moved into that extreme world of the sublime as both men created a perfect orchestration, plunging in and out. When she finally managed to open her eyes, the sight of Cane’s and Danger’s cocks dangling in front of her was far too delicious to resist.

“That’s it, take every one of us,” Bronco commanded as he rubbed her nipples between his thumbs and forefingers.

Dani slathered Cane’s shaft with saliva, moving her mouth up and down. She had her hands wrapped around the base of both, pumping and squeezing. She bobbed her head from one cockhead to the other, sucking for a few seconds then changing.

“Fuck. Yes,” Wolf mumbled. He smacked her ass several times with one hand, his grip with on her hip firm with the other.

There was no way of knowing how much time had gone by. She was hot and sweaty, her entire body tingling, and she could tell they were close to coming. As she clamped her pussy and ass muscles, Wolf’s strangled hiss floated into her ears.

2019-01-12
Chris
Previous: His to Train by Maria Monroe
Next: Subdued: A Dark Sci-Fi Reverse Harem Romance by Sara Fields