Captured and Tamed by Vonna Harper 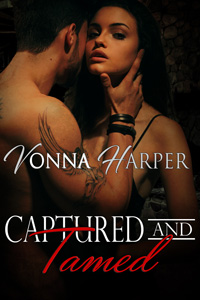 After the negligence and greed of a shady motorcycle racing promoter costs her little brother his life, Charil Ross makes it her mission to see that justice is done. But making enemies with a rich, powerful man turns out to be much more dangerous than she anticipated, and she quickly ends up in way over her head.

Range Seagan has been on the wrong side of the law for a long time, and kidnapping a troublesome woman seems simple enough. He is drawn to Charil the moment he sets eyes on her, but a job is a job—even if it involves the sexiest woman he’s ever seen—and when Charil resists being taken captive Range spanks her bare bottom and carries her off over his shoulder.

Despite her situation, Range’s bold dominance arouses Charil deeply, and as she lies naked, bound, and on display, she cannot help begging for her tough, handsome captor to take her hard and thoroughly in any way he pleases. Over the coming days Charil discovers that Range is no run-of-the-mill thug for hire, and as she learns more about his painful past she finds herself falling in love with him. But when the time comes for him to turn Charil over to the man who paid for her abduction, will Range still be ready to go through with the plan?

Publisher’s Note: Captured and Tamed includes spankings and sexual scenes. If such material offends you, please don’t buy this book.

Before she could make sense of his warning, he got off her, sat beside her, slid her around, and delivered a half dozen blows to her buttocks. Shocked, she tried to cry out. The awful sensation rolled through her, growing in intensity as it did. She’d never been spanked, never so much as considered the possibility.

Beyond furious, she struggled to roll onto her side. Damn it, how dare he! What made him think he could—she’d head-butt him! Make it beyond clear that she had no intention of letting him get away with something so ridiculous. To her dismay, he forced her breasts back into the bed and pressed on her shoulders to keep her in place.

More swats landed on her ass. Still in shock, she wiggled and cursed. Maybe he couldn’t make out the words, but he surely got the meaning.

“Want to fight, do you?” He sounded amused. “That can be arranged.”

How dare he add insult to injury by challenging her! She hadn’t surrendered by far. Invigorated by anger, she started bucking. She was vaguely aware that he was letting her struggle, just not enough to do her any good. At least her clothes kept what he was doing from hurting too much, but the strikes kept coming. Reaching deeper and deeper, confusing her.

He closed his fingers over the back of her neck. Concerned he might again press on a nerve there, she stopped resisting. To her disbelief, he pushed her skirt up to her waist and pulled her bikini panties down off her buttocks.

“Go on,” he said. “Call me every name you can think of. It’ll give you something to do while I continue disciplining you.”

“No!” Surely he understood that word.

“Save your breath. This is for your own good, maybe.”

“One, two, three, four,” he said in time with each blow he delivered to her bare skin. He was being so methodical, a teacher dealing with an unruly student. Making her buttocks burn and her eyes water. The earlier spanking had been more shocking than painful. Now he put considerable strength behind every blow. Because he’d done away with the minimal padding, it hurt, damn it, hurt in spades.

Confusing, degrading, shocking—and something she had no words for and surely couldn’t be happening.

Maybe he intended to continue to spank her for as long as it entertained him and his hand held out. If that was the case, she had no choice but to accept. To surrender. To experience.