Captured and Trained by Charlene McSuede 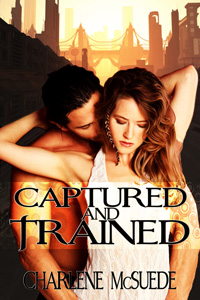 As a highly talented charmer, Eva can set almost any man’s heart aflame with ease. Unfortunately for her, when her hometown is raided by her people’s enemies and she is carried off as a captive, Eva ends up in the hands of Damon Adario, one of the few men powerful enough to not only to resist her charms but to demand her obedience as well.

Planning to sell her as a bride to the highest bidder once she has been properly trained, Damon brings Eva into his home as his ward and sets about teaching her to please her future husband. When she defies her strict new master, Eva is stripped completely bare and spanked long and hard, and she soon learns that continued disobedience will result in punishments which will leave her cheeks blushing with shame and her bottom burning both inside and out.

As Eva’s training progresses she is subjected to one sensual torment after another, yet though she resents her handsome captor she cannot help craving his touch. For his part, Damon finds that even he cannot fully resist Eva’s charms when she lies naked and helpless before him, and his need to claim her as his own grows fiercer by the day. But Eva is harboring a deadly secret, and when Damon learns the truth he makes a fateful choice. Will his decision tear both of their worlds apart, or can Eva find it in her heart to forgive the man who has captured her heart?

He returned to the armoire, putting away the paddle, and grabbing one of the smaller plugs he’d seen earlier, along with a small jar of oil. He opened the lid and dipped the tip of the plug in the oil.

“Use your hands to spread your ass cheeks for me.”

Eva’s eyes went wide at the demands, but she did as he said. Her delicate hands gripped her punished flesh, and she winced, pulling her cheeks apart and exposing the bud of her anus to his view.

He approached her, ensuring the plug was thoroughly coated in oil. Then, he reached down, putting his finger on the hot little hole where the plug would be seated. He rubbed some of the oil on it and was rewarded with a gasp.

“It burns!” she squealed.

“It’s punishment oil. It’s supposed to.” With that, he shoved the plug against her hole as she let out a whimper of dismay. It took a bit of work, moving it back and forth, to get it fully seated inside of her. It was only the size of his thumb, but the oil would ensure her bottom was punished both inside and out. “Stand.”

She took a deep breath and did as he said, straightening, but not looking him in the eye. She was clearly trying not to squirm as the oil did its work.

“Jin left dinner on the table before she left. Do you think you can behave long enough to eat?”

She nodded quietly. “May I put my clothes back on?”

“No.” His answer was firm. He’d threatened to make her go bare before, and she needed a taste of what it was like. “You’re wearing everything you will be wearing until I’ve determined you’ve earned the right to wear clothes again.”

2015-07-19
+admin
Previous: Claiming Crystal by Melody Parks
Next: Captured and Trained Carries Off a Top 100 Spot