Captured by the Highlanders by Katie Douglas 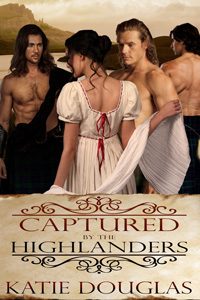 With their villages threatened by a powerful duke, Callum MacGregor and his companions Jacob and Kieran set out to capture an English noblewoman in the hopes of forcing their cold-hearted enemy to the bargaining table. Their plan goes badly awry, however, when the beautiful young lady they take captive turns out to be an Irishwoman who was herself being held prisoner.

Though she is thrilled to be free from the hated duke, twenty-five-year-old Bridget O’Kenney quickly discovers that her unwitting rescuers will demand her obedience and will not hesitate to strip her bare and spank her thoroughly should she fail to do exactly as she is told.

In spite of her situation, Bridget is intensely aroused by the stern dominance of the three handsome Highlanders, and when they claim her—first each in turn and then all at once—the pleasure is more intense than she would have thought possible. Callum, Kieran, and Jacob soon make it clear that they would like Bridget to belong to them forever, but can they keep her out of the hands of the duke who continues to pursue her?

Publisher’s Note: Captured by the Highlanders includes spankings and sexual scenes. If such material offends you, please don’t buy this book.

Callum wrestled her until she was face down in the wet grass, her black curls falling around her, then he drew her over his knee, arranging her bottom so it was high in the air. He tugged the hem of her skirt upwards, revealing her bare backside once more. It felt so undignified.

Deaf to her protests, Callum began swatting her bottom with his huge, hard paw again. It burned as he landed his palm on her sit-spot in a flurry of searing spanks.

“So, who are you, then, if you are not Mary Prince?” he asked. Bridget tried to wriggle free but Callum seemed to be doing just fine at holding her down without his two friends helping him. Worse, he was managing to pin her down with one hand, leaving his other hand free for spanking her again.

“Let me go!” she shouted, because she had been caught red-handed and she didn’t know what else to say since she couldn’t tell him the truth.

Her bottom was stinging and burning under his firm hand but she thought this was preferable to confessing that she wasn’t a valuable captive. Her stomach flip-flopped as she thought about what might happen if these men took her back to the duke.

“Tell me your name.”

“It isn’t important. Let me alone!” She clung to the hope that he might decide this spanking was over before she cracked.

As his hand landed even harder, she knew she was wrong. Her bottom felt so sore, and the tears in her heart were close to overflowing. She was determined to fight him.

“Please, I’m sorry!” she begged, but he wasn’t listening; he was spanking her hard and she soon started to cry. The situation was completely hopeless. His hand kept colliding with her defenseless rear, making it impossible to think of a good lie.

When he had made her bottom feel like it might be about to catch fire, she started to shake.

“Jacob, hold her cheeks apart for me.”

Bridget had no idea why he was going to do that, but she was relieved that he had stopped slamming his hand against her sit-spot.

“It’s about time,” Jacob growled, then Bridget felt his hands, one on each of her burning bottom cheeks. He parted them, exposing her bottom hole to Callum. She took a breath, wondering what he planned to do, and hoping he wouldn’t notice how wet she was down there.

A sharp swat landed hard on her bottom hole and she squeaked as it stung from his punishment. Her eyes watered and her button throbbed as he did it again. If the spanking had been unbearable, this was even worse, and the shameful exposure of her bottom was almost as awful as the sharp sting from his hand landing between her cheeks.

As he continued, the scorching feeling seemed somehow to get inside her back passage, as well, and soon she knew she was outmaneuvered. Unable to stand it any longer, she started screaming her name at the top of her voice.

“Bridget O’Kenney! Bridget! O’Kenney! That’s who I am! That’s why I didn’t tell you!” After that, she descended into huge, noisy sobs as she cried while he kept spanking her.

2017-07-09
Chris
Previous: Mountain Man Daddy by Kara Kelley
Next: Owned by the Wolf by Jinx Neale