Captured by the Sultan by Kallista Dane 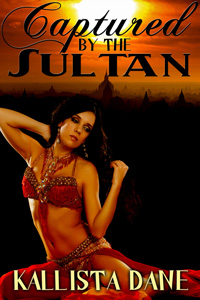 When her caravan is attacked during the journey, Shay is rescued by Tahraz, the arrogant sultan of a hidden oasis, who promptly announces that she will submit to his every command or face punishment like all the other women of his harem. Shay discovers all too soon that Tahraz is as good as his word and she quickly ends up across his lap, her royal robes pulled up and his rough palm reddening her bare bottom.

Hatching a plan to win her freedom, Shay proposes a contest—a series of chess matches—with herself as the prize. If she is the winner, the sultan will grant her freedom, but if he triumphs, Shay will kneel before him as he administers pain—or pleasure—at his whim. But when Shay realizes that she is in love with Tahraz, will she continue to resist or will she give in to the savage hunger he has ignited in her and surrender her body and her heart to him fully?

Dasheena tried to draw Shay into the dance, but she shook her head. “I do not know how to dance as they do,” she whispered. Dasheena looked worried and tried again to pull Shay to her feet, but she remained seated.

Tahraz saw her refusal and sat up abruptly. He pushed Neema aside and took two steps forward. His entire body was sleek and hard and Shay found herself staring at his rigid member outlined by the thin fabric as he approached.

He grabbed her arm and dragged her toward him, then dropped back onto the chaise, pulling her face-down over his lap as he did so. “You will perform for me,” he stated. “But first you will be punished for disobeying. Dasheena is head of my hareem and you will do whatever she requires of you without question, as though it is I who gives the command.”

He pulled Shay’s robe up roughly, baring her ass. Holding her firmly down on his lap with one hand, he began peppering her already sore bottom with firm swats from the other.

Tahraz made a sound deep in his throat and she suddenly became aware of his thick rod pulsing against her mound. With each movement of her hips, she was rubbing herself hard against it. The result was stimulating him as much as Neema’s erotic dance had done. He stopped abruptly and she felt his fingers slide down between her legs, probing. Shay was shocked when her body responded, despite the pain she was in. She reached back, trying to push his hand away. But he simply grabbed both her wrists with his other hand and pinned them behind her back.

“If you dare to move again, I will simply have you tied down and begin all over,” he announced. He began spanking her again, slowly, this time deliberately grinding himself against her with each powerful smack.

Shay’s throat was tight with the effort to hold back her sobs. She had never been treated this way in her life. Her bottom was stinging and burning, but at the same time, another powerful sensation was building between her legs. Her humiliation was compounded by the fact that Tahraz seemed to know she was becoming aroused in spite of herself. He settled into a wicked rhythm, first spanking over and over, then stopping to slowly dip a finger inside her and spread the slick juices he found back and forth from her throbbing clit to the tight bud of her ass.

After one last lingering exploration with his long fingers, Tahraz pushed her off his lap, leaving her crumpled in a heap on the rug at his feet. “You will learn our ways,” he announced. “Then tomorrow you will entertain me.”