Captured and Examined by Kallista Dane 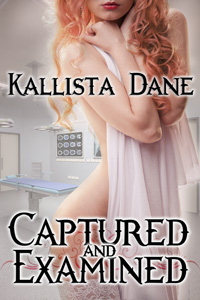 When her father tries to force her to marry fat, old, drunken Owen Leary to preserve the family lands, Tess O’Rourke runs away from home. She gets lost on the heath in the midst of a ferocious storm and loses consciousness, only to awaken in a cave, naked and shivering, staring into the eyes of a handsome stranger. To her dismay, the man questions her in an unfamiliar language and then spanks her bare bottom when she tries to run away.

After computers all over Europe are hit with a crippling attack, Quinn, an ex-Navy SEAL now working for NATO’s cyber-terrorism squad, is dispatched to the Irish coastline in search of the problem’s source. It is there that he discovers a naked Irish lass hiding in a cave near an ancient stone outcropping.  After she attacks him and attempts to flee, he brings the defiant girl back to his headquarters with a well-spanked bottom. Once there, his medical team conducts a thorough examination, leaving his captive deeply humiliated and even more determined to escape.

Quinn has no intention of letting her go until he gets the truth, but Tess speaks only Gaelic and seems to know nothing of modern day life, and hard as it is for him to believe, over time Quinn becomes convinced that she has somehow been transported from the past. With each passing day his feelings for the feisty redhead grow stronger, and when he discovers that his superiors plan to lock her up indefinitely and study her like a lab rat, Quinn risks everything to rescue her. But can he keep her safe long enough to unravel the mystery that brought her into his life?

Her eyes grew large as she took in the room. He pointed to the toilet but she just stared at him. When he turned on the tap, she muttered something and backed away, coming forward slowly to watch as clouds of steam rose from the water rapidly filling the tub.

“Get in.” He pointed to the hot water, mimicked climbing into the tub. She shook her head and backed away again. “I won’t look,” he promised, turning his back to give her a bit of privacy. He waited, then hazarded a glance. She was still standing there holding his jacket around her, eyes wide as saucers, watching the water level rise higher and higher. He turned off the tap and reached for a bar of soap and a cloth.

“Wash,” he demanded, pointing to the tub.

She looked at him, looked back at the water, and made a mad dash for the door. Quinn caught her around the waist, dragging her back. She let go of the jacket and it dropped to the floor. Her chest was heaving and the nipples on her lush breasts stood out in tiny red peaks. Distracted by her sudden nakedness, he didn’t see the punch coming until it connected with his nose.

Quinn let out an angry roar as blood spurted out again. His eyes narrowed and a phrase popped unbidden into his head, something he must have learned at his grandmother’s knee.

“Coimhéad fearg fhear na foighde,” he said, his voice low and menacing. Beware the anger of a patient man.

She saw the look in his eyes and backed away, obviously fearful of what she’d done. Quinn came at her, trapping her in a corner. Then without another word, he sank down on the edge of the tub and reached out to yank her face-down over his lap. This time it was he who caught her by surprise. His hand came down, hard and fast, connecting with her mud-smeared naked bottom with a loud smack.

She gasped, then shrieked and started kicking wildly when he spanked her again. Quinn simply trapped her flailing legs between his and peppered her bare behind with firm swats from his open palm. She started howling, anguished cries interspersed with what he could only assume were Gaelic curses. He made out a colorful reference to his mother and spanked her extra hard for that one. When she finally sagged over his lap, all the fight drained out of her, he simply leaned over and dumped her into the tub, drenching them both.

She came up spluttering. He held her there with one firm hand on her shoulder.

“Either you wash up, right now, or I’ll get in, spank you again, and then do it for you,” he announced, tossing the cloth and a bar of soap into the water. “I’m wet enough already that it won’t matter.”

If she didn’t understand the words, she certainly understood his tone. She shot an evil look at him. Then she deliberately turned her back, picked up the cloth, and began dabbing away the dried blood on the worst of her cuts and scrapes.