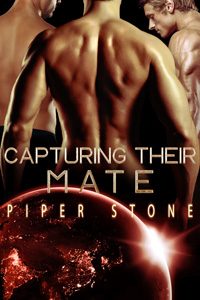 Their orders are to capture, tame, and breed me. They intend to carry out their mission.

I thought the Cenzan invaders could never find me here, but I was wrong. Three of the alien brutes came to take me, and before I ever set foot aboard their ship I had already been stripped bare, spanked thoroughly, and claimed more shamefully then I would have ever thought possible.

They have decided that a public example must be made of me, and I will be punished and used in the most humiliating ways imaginable as a warning to anyone who might dare to defy them. But I am no ordinary breeder, and the secrets hidden in my past could change their world… or end it.

Publisher’s Note: Capturing Their Mate is a stand-alone novel set in the same world as Conquering Their Mate. It includes spankings and sexual scenes. If such material offends you, please don’t buy this book.

“You will have my cocks inside you soon, little human. I know that’s what you crave.”

I had no way of answering him, the insane ecstasy rolling through my system almost blinding. I bit back a moan, remembering that we were being watched. Oh, God! Other monsters were watching me being taken like some tramp.

“Every inch of you now belongs to me to do with as I please. You will remember that, little human.” Khrelan pressed a single finger inside, pushing past the ring of muscle.

“Fuck. Me.” Pain coursed through me, driving the breath right out of my body. I dug my fingers into the dirt, blinking as he slid a second finger beside the first. As he pumped in and out, he spread his fingers open and twisted. There was no way of describing the sensations. No way of understanding why my body was responding in any manner other than shutting down.

“Tight. I cannot wait to spew seed deep inside both holes.”

His thumb continued to slide back and forth across my pussy lips, driving me to a state of absolute nirvana. “Oh. Oh. Oh.” I heard the moans, almost animalistic in nature and the sounds shocked me, but try as I could, my resolve was crumbling.

As he pressed the tip of one cock to my pussy, a second to my darkened hole, I held my breath. I didn’t need to see him to know his cocks were massive in size, so thick and long that they would nearly split me in two.

He growled in the most savage manner as he began to drive his shaft inside, gripping my hip with his other hand.

Gasping, I could no longer see anything as he spread me, my muscles straining to accept. He was so thick and so hard, both cocks filling me completely. When he thrust both all the way in, I yelped, unable to hold back. “Oh, God!”

My muscles strained, accepting as he went even deeper, consuming every inch of me. My pussy clenched and I could feel his nubs, making everything tingle in ways that could never be described. I was being taken like a wild animal, the passion unbridled and savage. This alien, this creature was claiming all of me as belonging to him.

The more brutally he plunged, the more I was taken to both stimulating and revolting heights, pleasure consuming me. My mind and the girl who fought for her independence wanted to lash out, to push him away, but my body wanted something else entirely. Shit. Shit! I was enjoying this. I was… I craved this. No. No!

The more I struggled in any manner, the harder he drove into me, plunging so deep that I could no longer make any sounds.

Khrelan smacked my ass several times as he thrust, making certain I obeyed and succumbed. I continued to hear his guttural sounds, so gravelly and sensual, enveloping my heated skin. The electricity sparked a wild fire deep within and a climax raced up from my curled toes, threatening to give me away.

“Come, sweet human. Come on my cocks as I fill you with my seed.”