Carried Off: An Alpha Shifter Romance by Raven Willow 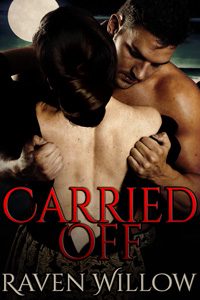 She has been claimed and marked. Now she will be bred.

Though the people of her village spoke of them in whispers, the first wolf Riona set eyes on was the one who carried her off. But the fearsome beast did not merely use her as he pleased and then allow her to return home. He stripped her bare, claimed her roughly, and marked her as his mate.

Now, as she stands before his pack naked and on display so that his mastery of her body is left in no doubt, Riona begins to understand what it means to belong to an alpha. He will mount her and mate her as often as he desires, and she will come when she is called or be spanked until she is sore and sobbing, then taken hard and thoroughly with her well-punished bottom still burning.

Publisher’s Note: Carried Off is a stand-alone novel which is the first entry in the Taken Mates series. It includes spankings and rough, intense sexual scenes. If such material offends you, please don’t buy this book.

“W-what will you do?” Riona hugged herself.

“Lie across my lap and pull your skirts up.”

No… not that. Anything but that.

Riona shook her head and almost backed away again, but he caught her hand.

“I will tell you this once. Across my lap.” His stern order prompted her legs to move, positioning herself how he asked.

Riona frantically shook her head as he firmly handled her body.

He adjusted her, being sure not to press her against a spot that would be tender for her. She now lay over his lap comfortably, but she had not pulled her skirts up yet.

“What else did I tell you to do, sweetheart?”

“Do that for me now, please.” He was making her perform this act as part of her punishment. Being made to expose herself would add to her embarrassment.

Riona’s face flushed as she pressed it against his thigh. She felt his hand rub over her bottom and over the backs of her thighs. Her body jumped as his fingers made contact. He wouldn’t even swat her over her layers of skirts?

“You know why I must do this, little one?”

The first swat came without warning, making her head shoot up.

“Ah!” Riona sucked in air through her teeth.

“No, you disobeyed by doing what?”

Another swat hit the same area as the first. The sting went straight between her legs.

“By running away when I was told not to!” He was going to make her voice every single reason why she was being delivered a spanking.

“Yes. What do you think this one is for?” His hand came down to the other cheek, making a loud echo in the forest.

What else could he mean?

“Try that again, little girl. What else have you done besides this little foolish act you pulled today?”

Riona could feel him smirk. What else? She searched her mind from the day before. Being with the pack? Earlier that morning? Breakfast. Yes, breakfast. When she would not eat.

“Yesterday, when I would not eat!” He delivered several more spanks to each cheek until tears began to prickle behind her eyes. He repositioned one leg so it held her ass higher in the air for him.

“It hurts!” Riona held on to the leg her upper half was draped across to keep her from falling while he continued his work on her bottom.

“It is supposed to, mate. This is how my kind disciplines our unruly little females. We pull them across our laps or bend them over and spank their little asses until we are satisfied with their apologies. Then we fuck their naughty little bottom holes.”