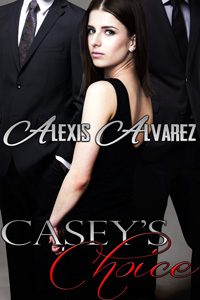 Hunter’s cold response to the truth about her identity leaves Casey dejected, but Max Abbott—one of the most respected doms at the club—quickly sets about mending her broken heart. Max mixes firm-handed discipline with gentle reassurance in way that she finds deeply comforting, and his masterful lovemaking brings her pleasure beyond her wildest dreams, but when Hunter tries to win her back will Casey be ready to make the most important choice of her life?

“Ouch!” she wailed out, trying to jerk away. “The lube burns. Make it stop.”

“It’s ginger lube,” explained Max. “And this,” he pushed something at the entrance to her anus, “is the plug. It’s coated in the lube. The burning’s going to get a little worse before it gets better, I’m afraid. Now, bear down and push at me, let the plug in. If you don’t cooperate, I can add more lube, so I encourage you to be obedient.”

“It’s hard, I can’t,” she managed to gasp out. “It hurts.” But something about the burn was also arousing. He pushed steadily, and she was able to relax her cheeks enough to allow the plug access. She felt a burn as it pushed in, then a fullness. The burning sensation increased, though, and she tried to clench her ass cheeks, which only made the discomfort from the plug worse. It was nearly enough to make her need to stop, but also just enough to make her throb with desire for the man making her take this—a confusing mix that left her head spinning in confusion. She liked this, God help her—it felt sexy and dirty. From the way Max’s fingers lingered on her skin, the way he trailed his touch over her body, she knew he liked it too.

“Don’t clench,” suggested Max. “We want your cheeks to be nice and relaxed for this part of the punishment. It hurts more that way, and bruises less. Better for you both ways. The pain from the plug and ginger is a nice reminder to stay soft for us.”

“I hate you,” she cried, tears falling. She was unable to wipe them, tied as she was, and her vision blurred. She could only see the floor, though, and she squeezed her eyes shut.

“You say that now, but I think you’ll feel differently when we’re done.” Max picked up something from the floor. “Do you have anything else to say to me?” He bent to look into her face, and his gaze was stern, but his eyes searched her. “Any other… words?” He wiped her tears with his fingers, and the touch made something swell in her chest, something strange and new.

She shook her head, unable to speak. She knew what he was asking, but she needed to finish this, as much as she could.

“Good. First the paddle. I’ll give you fifteen hard ones, then we’ll switch to the crop. You count them, Casey. If you miss one, we start over from one, so stay sharp. Let’s go.” He brought the paddle down with a resounding snap, and Casey squealed.