Caught and Collared by Vonna Harper 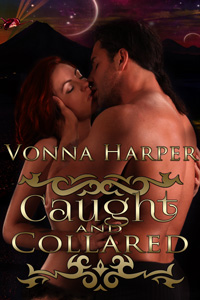 Stranded on a primitive planet, Ram knows he’ll need help to locate the materials required to repair his ship. After capturing a native female to serve as his guide, he promptly sets out to tame the proud, defiant woman with the help of a firm hand applied to her bare bottom as often as necessary.

Saasa expects the worst when a handsome, muscle-bound stranger takes her captive, and she quickly learns that he will not hesitate to strip her bare and spank her soundly to deal with any disobedience. Yet though his punishments leave her sore and blushing with shame, she soon discovers that his touch can bring great pleasure as well. Before long, she finds herself not only yielding to his mastery of her body, but actually longing for him to claim her completely.

Even with Saasa at his side, Ram is certain that navigating this harsh world will not be easy, and both his skills and her instincts will be needed if they are going to succeed. But with his passion for her growing stronger every day, will he be able to bear leaving her behind when the time comes for him to return to his own world?

No longer the bold and brave woman she’d always been, she felt sweat roll off her. Caught between seeing everything that was happening and being trapped deep inside instinct, she viewed herself through his eyes and under his touch. A naked prisoner with a well-spanked ass and her sex juices on both openings without use of her limbs, she was bent before the man who’d claimed her.

His knowledge of how to arouse a woman frightened and thrilled her. It didn’t matter that she’d never been tied up and had never imagined such a thing might happen. Tonight and tomorrow had no meaning; there was only this moment and his hands on her. Although she still wore her simple top, her breasts were exposed, which made it impossible for her to think of herself as anything except nude.

Reaching around and under her, he cupped a breast and by turn pressed it against her ribcage and drew it down. His assault on her pussy began again. One moment he penetrated her there as deep as his fingers could go while the next he bathed her hot sex and ass opening with her juices. When he wasn’t doing that, he pressed his cock into her now tender crack or against her buttocks as he shifted this way and that.

He was playing with her.

She jumped again when he raked his nails over her buttocks. “Just making sure I have your attention,” he said. “You haven’t forgotten what I did to this part of you, have you?” He punctuated his question by smartly slapping her cheeks one at a time.

“Tell me.” He pressed firmly where he’d just rubbed. “What did my manipulations teach you?”

I’m not going to answer.

“Have you forgotten the lesson?” He made his point by striking her buttocks repeatedly, each blow building upon the one before it.

By the spirits, that feels so good! “I—I don’t know what you want me to say.”

“How being spanked and my finger buried in your ass makes you feel. Not the pain but what it does to you emotionally. How it changes your belief in what you are.”

2015-09-12
+admin
Previous: Her Highland Guardian by Ava Sinclair
Next: The Sheriff’s Little Girl by Alex Reynolds