Chosen by the Governor by Jaye Peaches 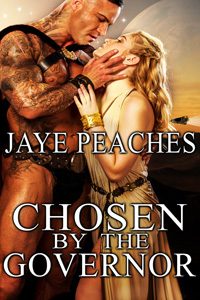 When she is caught spying on the alien empire which has conquered Earth, Freya is shipped off to a prison colony on the distant planet Tagra. Upon her arrival, she is subjected to a thorough, intimate medical examination intended to assess her response to sexual stimulation, and when she protests the humiliating procedure her bare bottom is soundly spanked.

Marco takes his job as governor of Tagra seriously and he is well-known among the prisoners for his firm-handed discipline, but from the moment he first encounters Freya he cannot keep the feisty Earthling off his mind. After taking it upon himself to personally oversee her initial exam, he delights in bringing the naked, blushing human to one quivering climax after another.

Though Marco quickly proves that he will not hesitate to punish Freya when she defies the rules of the colony, her burning backside does nothing to diminish her growing need for him to claim her and take her long and hard. She soon finds herself falling ever more deeply in love with the handsome, dominant alien who both demands her submission and brings her pleasure beyond anything she could have ever imagined, but can she dare to hope that Marco will one day see her as more than just his prisoner and his plaything?

“The punishment is the rod—ten hard strokes on her bottom. This will be done in conjunction with the application of aylerberry juice around her anus and with the insertion of a butt plug, inside her bottom.”

A gasp went up around the room. What the hell was aylerberry juice? A berry bush wouldn’t be native to Tagra, so it must be something in one of those bottles in the punishment room.

“Governor, please proceed as you wish.” Lalita stepped away from the bench.

She heard noises behind her, but couldn’t see what he was doing. Only when something icy cold rested between her bottom cheeks did she understand what was about to happen. Was he really going to insert a plug into her tight hole without preparation?

She whimpered and rattled her ankle bindings.

“Do you wish her gagged?” Lalita asked Marco in hushed tones.

The tip of the plug—she’d no idea of its size—nudged against her puckered bud. He smeared something along the furrow, using the smooth surface of the plug to spread the odorless concoction.

She held her breath, wondering what nasty sensation would torment her. All she felt was the cold metal tracking up and down her cleft. He rested his spare hand on the top of her ass. The warmth of his skin contrasted with the icy plug.

“Freya,” he said softly. “You need to relax or else this is going hurt more than you’d want it to. I’m going to ask you to breathe in deeply, then I’m going to insert the plug. Now. Breathe.”

He pressed the hard bulge of the plug into her bottom hole and she whistled in a lungful through gritted teeth. The burning sensation as he pushed the bulbous plug inside was intense, almost too much. She struggled to relax her sphincter muscles. She cried out and her buttocks instinctively clenched around the plug, resisting its entry.

Marco continued to penetrate her tight hole without pausing and it came as a relief when he announced it was fully inserted. She exhaled and tried not to imagine the scene—bent over with her bottom plugged and on display.

2016-04-30
+admin
Previous: Mercenary by Renee Rose
Next: Claimed by Her Mates by Grace Goodwin