Chosen by the High Judge by Jaye Peaches 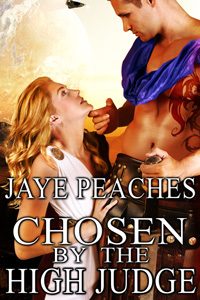 After twenty-year-old Zara Webb is arrested for delinquent behavior while living as an exchange student in an alien colony, she is placed into the custody of High Judge Galen Hosta. For the duration of her sentence, she will live in Galen’s home and under his authority, and the stern, handsome warrior will have the right not only to punish her in any way he sees fit, but also to take her to his bed and enjoy her beautiful body in any way he pleases.

Within moments of her sentence being pronounced, Zara finds herself over Galen’s lap for a painful, embarrassing bare-bottom spanking. But when she kneels at his feet, blushing crimson as she is made to thank him for her well-deserved punishment in the most humiliating way possible, she cannot hide her helpless arousal.

Over the coming days, Zara discovers that Galen’s mastery of her body will be far more thorough than she would have thought possible, yet even as she is brought to one intense, shameful climax after another, her need for him only grows stronger. But when her sentence is complete and she is no longer his prisoner, will she choose to stay by his side as his mate?

Publisher’s Note: Chosen by the High Judge is a stand-alone book set in the same world as Chosen by the Governor. It includes spankings and sexual scenes. If such material offends you, please don’t buy this book.

“I’ve no intention of hurting you.” Galen removed his jacket and draped it over the back of the chair. “But, if you wish to avoid a spanking, I suggest you part your legs and show me your pussy. Do so now, Zara, or I will turn you over and spank your bottom until it is red hot.”

He’d kept a distance from the bed. It enabled her to see him in his entirety, from the thick layer of hair on his head, down his straight nose and strong jawline to his square shoulders and narrow hips. His thighs, God, she’d felt them as she’d lain across his lap. Thick and hard. Packed with muscles. But what caught her eye was the bulge in his pants. He was eager for her.

Taken and claimed—such evocative words should repel, not tantalize. Yet, given how the fluttering sensations in her belly were drifting south, she wasn’t afraid of him. She decided to give him what he asked for.

Slowly, she unfolded and swung her knees apart. As Bisma had told to do, she drew up her feet until they reached her bottom. Her knees shook as they spread, unsupported and outward.

“Good girl,” he said, folding his arms across his chest. “Calm yourself. Breathe deeply and then that shaking will stop.”

She inhaled and released a slow exhale. It helped. Her legs no longer felt like jelly fresh out of the mold.

“Now I’m going to inspect you, Zara. You have something unique and I wish to behold it. Touch it. You know what that is?”

She nodded. “My clit,” she whispered.

Vendu women had no external clitoris. She closed her eyes and held her breath.

“No, Zara. You will watch me with your eyes open. You’ll come to appreciate seeing me because you won’t always be given that privilege.”

Her eyes sprang open. Not see him? When and for what purpose? She swallowed a hard lump in her throat and watched him kneel by the side of the bed.

He reached between her legs with finger and thumb and touched each side of her folds. With a surprising gentleness he drew them apart and exposed her pussy.

“You’re wet,” he said softly, leaning toward her.

Wet! She couldn’t be. How could she be that aroused?

2017-08-28
Chris
Previous: Corrected by the Doctor by Samantha Madisen
Next: His Pet Human by Rose St. Andrews