Chosen by the Senator by Jaye Peaches 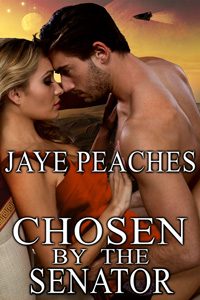 With her career prospects on Earth in jeopardy due to a corrupt mayor’s plan to blackmail her, college student Paige Lester decides to accept Senator Jamen Hosta’s offer of a job as his assistant, even after the powerful, handsome Vendian makes it clear he will require not only that she submit to his strict correction, but that she surrender her beautiful body to him as well.

Though she is shocked by his demands, Paige is deeply aroused by Jamen’s bold dominance, and soon she is writhing in ecstasy as he takes her longer and harder than any man from Earth ever could. Upon reaching his planet, a sound spanking for disobedience during a humiliating medical exam quickly demonstrates that Paige’s new life will be very different from the one she left behind, but will she one day find a place for herself in this foreign world… and in Jamen’s heart?

Publisher’s Note: Chosen by the Senator is a stand-alone novel which is the third entry in the Under Alien Law series. It includes spankings and sexual scenes. If such material offends you, please don’t buy this book.

“Spank me, if you want,” she muttered, walking past him. “I don’t think it will help.” She lied. It was such a huge lie and if he could look inside her head and see what she saw, then he would know she was not saying what she was thinking.

“Oh.” He moved up behind her and yanked down her pants. “I think it will.”

She shrieked as he snapped the waistband of her panties. “No, please don’t strip me. I’ll do it… sir.” The word slipped out of her mouth with ease.

She tore out of her clothing in a hurry to be naked. Usually when she undressed, it was like a performance, conducted like a striptease and for his benefit. This time, speed was of the essence. He was in a different mood. The clothes were heaped in a pile on a stool. The final layer, her bra and panties, took longer to remove. She had to steady her breathing and calm her trembling hands.

Bare and exposed, she bent over the end of the table and pressed her face into the soft padding. It smelled of chemicals, the kind used to clean surfaces. She tucked her arms around her head and pretended they were a hood, hiding herself from any prying eyes.

Jamen nudged apart her feet. “Wider, please. And don’t hide from me. Arms above your head and hands together.”

She straightened her elbows and pressed her palms into a prayer position. She waited, expecting the first spank, but nothing happened. Had her easy capitulation caused him to change his mind? Would she be bothered if it had?

This had to be a test. Maybe for both of them. She could end it, her agreement with Jamen, and catch a flight back to Earth. If he didn’t think she was up to it, he’d probably call it off too. Both scenarios horrified her. She wanted to be with him. But what had happened to the generous lover who’d taken her to his bed and shown her a great time? Had he been left behind on Earth?

He opened a drawer and retrieved something. She couldn’t see what out of the corner of her eye. She rose up on tiptoes and tried to imagine she was back at the Bow and Tie. There she would revel in the excitement, even the audience watching ramped up the adrenaline and gave her the much needed buzz.

He patted something against his palm. It sounded solid. What the hell had he found?

The smack covered both her buttocks and the burning sensation was instantaneous. She jumped up.

“Hold your position, hanjin,” he reproached.

The formality helped. He was distancing himself from his lover and focusing on the task. She needed the gap, or else she would be too confused by her meddlesome emotions.

She lowered herself down and flattened her breasts into the table. Jamen grasped her hips and angled them upward, forcing her feet off the floor. He spread her cheeks apart, as if to inspect what lay between them.

“I shall remain in the room throughout our examination,” he said.

2018-04-13
Chris
Previous: Tamed by the Alien by Adrienne Blake
Next: Theirs to Use: A Punishment Reverse Harem Romance by Emily Tilton