Don't Miss
Home / Blog / Chosen for Their Use by Ivy Barrett

Chosen for Their Use by Ivy Barrett 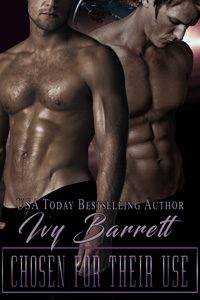 When Kyla Harms’ plan to help her friend escape from the protective custody of the Ventori goes badly awry, she is saved by the intervention of LeAuntiez, the companion, advisor, and bodyguard of Chancellor Bronsen. Upon arriving at the home of the two powerful, stunningly handsome aliens, Kyla quickly discovers that their dwelling is not the only thing they share.

Bron and LeAuntiez have chosen Kyla as their mate, and she soon learns that when she behaves badly they will not hesitate to strip her bare and punish her quivering bottom both inside and out. She is overwhelmed by shameful, desperate need long before the first stroke of the belt lands, and by the time her correction is complete she is begging to be claimed hard and thoroughly.

As her beautiful body is used and enjoyed in every way possible, sometimes by one of her mates and sometimes by both of them at the same time, Kyla cannot deny her intense arousal at being so completely and utterly mastered. But when the scheming of a determined band of enemies puts all of their lives at grave risk, will Bron and LeAuntiez be able to protect their little human?

Publisher’s Note: Chosen for Their Use is a stand-alone novel which is the fourth book in the Ventori Masters series. It includes spankings and sexual scenes. If such material offends you, please don’t buy this book.

“Your body belongs to us now. You belong to us. Never again will you endanger yourself. Is that clear?” He punctuated the question with a series of super-fast thrusts, rocking her against the ottoman. It didn’t hurt, but the wet slapping sounds made her feel degraded, used. There was no tenderness in this, no connection. He’d basically done the same thing this morning after her spanking, but the contrast was glaring.

He shoved in all the way, then pulled up until her anus stretched and stung. “I asked you a question.”

She cried out, shocked and humiliated by his harsh treatment. “Yes. I understand.”

He lowered his hand, then slowly removed his fingers. She felt strangely empty and alone. More gel drizzled onto her abused rear opening. She tensed, then shivered as he worked it inside with the tantalizing slide of those wicked fingers. She’d just begun to enjoy the sensations, when he pulled his hand away and positioned something larger. Was that his cock? No it wasn’t warm, like flesh. More like a butt plug or dildo. She’d done this sort of thing before, but the toy she used was smaller than a cock, probably smaller than two of his fingers. She liked the slide. It always made her feel naughty. But she feared the stretching pain of anything more invasive.

He drove the toy inward with steady pressure. She closed her eyes and tried to relax, even push out against the invasion.

“Take it,” LeAuntiez ordered. “This ass is ours and we intend to use it often.”

Dark desire curled through her as she imagined LeAuntiez filling her, using her, stretching her until she screamed with the pleasure/pain. Her sphincter gradually spread, opening for whatever he was working inside her. She clenched and unclenched her hands, fighting hard not to struggle or tense up.

The slow burn flared into actual pain for a split second, and then the stubborn muscle contracted around a narrowing and she sighed. Definitely a butt plug. She’d seen images of them on the internet, back when the internet was still operational.

“Good girl,” he praised, but he wasn’t finished.

Her arousal built quickly, helpless against all the new sensations. But LeAuntiez knew how to read her body, when to push her and when to pull away. Over and over he brought her to the brink, then denied her the reward. She whimpered and moaned, moving her head to one side and then the other. Still, she couldn’t escape the persistent stimulation.

“Please!” she cried as yet another orgasm fizzled away. “Either stop or let me come!”

This was easy? Her core ached and her clit felt swollen and over-sensitized. Even her nipples hurt from rubbing against the ottoman. “Will you please take that thing out? It feels really strange.”

2018-09-30
Chris
Previous: Claimed by the Beasts by Piper Stone
Next: A Shameful Punishment by Emily Tilton