Claimed and Mastered: An Alpha Shifter Romance by Delta James 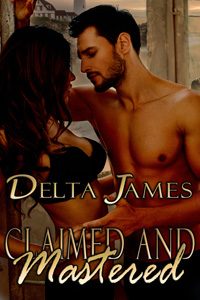 She vowed she would never be mated. He claimed her anyway.

Ava Rhys has always chafed at submitting to the authority of her pack’s alpha, but when he tries to sell her body in return for money and influence, she decides she would be better off on her own. Ava’s plans to live as a lone wolf in the backwoods of Maine are thrown into turmoil, however, when the local game warden makes it his business to take her in hand, and the battle-hardened former Army Ranger soon proves to be just as fiercely dominant as any alpha shifter.

Declan Collins knows a woman in need of a man’s firm hand when he sees one, and it isn’t long before Ava is kneeling naked at his feet with her well-spanked bare bottom on display. Once he has taught her a better use for her sassy mouth, she quickly finds herself screaming her helpless, shameful submission into the bedsheets as he claims her so roughly and so thoroughly that she is left in no doubt that she belongs to him and there is nothing whatsoever she can do about it.

With each passing day he masters her body ever more completely, never hesitating to punish any hint of defiance before using and enjoying her in ways more humiliating than she could have ever imagined. But when instinct causes her to bite him in the throes of yet another intense, desperate climax, will she lose him forever or will she end up mated to an alpha shifter after all?

Publisher’s Note: Claimed and Mastered is a stand-alone novel which is the sixth entry in the Wayward Mates series. It includes spankings and sexual scenes. If such material offends you, please don’t buy this book. Also note that Claimed and Mastered shares its setting with Adaline Raine’s previously published books Marked by the Alpha and Rules of the Pack, and it was written only after receiving Adaline’s permission and support.

“When I put you over my knee, Lizzy, you stay there until I tell you that you can get up. Clear?”

“Yes, Declan,” she said as tears threatened to begin to fall again.

“Settle down, Lizzy. I’m going to put this plug in your bottom before I send you to stand in the corner to reconsider the decision you made earlier today to disobey me. You can either show me you’re ready to behave and take this portion of your punishment or I can go back to spanking you until you’re ready to do so. Are you going to submit or fight? Keep in mind either way, you’re getting your bottom plugged before I send you to the corner.”

Ava knew she was in no position, literally, to fight with him. And the fact was everything in her was screaming at her to submit and yield to his dominance.

“It won’t hurt, Lizzy. It’ll be uncomfortable and it will make you focus on why you want to behave.”

“No, Lizzy. Just relax, sweetheart and breathe deeply. It will make what’s going to happen a lot less uncomfortable for you.”

“And four,” she said resentfully, “because that’s what you want and I don’t get any say in it.”

“Of course you get a say. Behave yourself and it won’t be used on you as part of your punishment,” he said humorously. “Do you want me to proceed or do you need to be spanked some more? Keep in mind, Lizzy that if you choose to behave, chances are I won’t fuck you with it still in there… this time.”

“I would and I will unless you settle down right now.”

Ava could hear in his voice and feel it in her bones that he was done talking. She either submitted and he’d take the damn thing out before he fucked her, which she was desperate to have him do, or he’d leave it in her. She sighed and forced herself to relax and accept.

“That’s my good girl,” he said in a deceptively seductive tone. “It’s going to be a bit uncomfortable as it goes in, but then your body will adjust to having it there. The man in the adult toy store did say the peppermint lube while having a nice aroma does tend to put just a little extra tingle in a little girl’s rear when it’s used back there.”

2019-02-02
Chris
Previous: Taming His Brat by Piper Stone
Next: Bride to the Beast by Samantha Madisen