Claimed and Mated: An Alpha Shifter Romance by Delta James 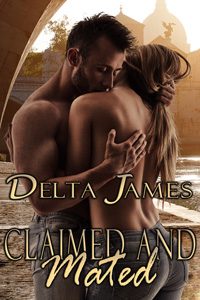 He tried to romance her, but now it is time for his mate to be claimed.

When Catherine Livingston travels to Italy to investigate her sister’s disappearance, it isn’t long before she crosses paths with the man who has been ravishing her almost every night in her dreams. More shocking still, the mysterious, darkly handsome stranger leaves her in no doubt that he is well aware of the connection between them and he has no intention of ignoring it.

Marco DeMedici seems to all but own the city of Florence, and it soon becomes clear that he will not rest until Catherine belongs to him, even if it means carrying her off, stripping her bare, and spanking her until she is sobbing, obedient, and begging him to take her hard and thoroughly.

Despite Catherine’s efforts to run from him, her body’s response to Marco’s stern dominance cannot be denied, and when he reveals that he is an alpha shifter it only makes it more obvious that her world will never be the same. She will be his mate, and the only thing left up to her will be how loudly she screams his name as he claims her as roughly and shamefully as he pleases.

Publisher’s Note: Claimed and Mated is a stand-alone novel which is the fifth entry in the Wayward Mates series. It includes spankings and sexual scenes. If such material offends you, please don’t buy this book. Also note that Claimed and Mated shares its setting with Adaline Raine’s previously published books Marked by the Alpha and Rules of the Pack, and it was written only after receiving Adaline’s permission and support.

“Now, my Catherine, do you have something you wish to say to me?”

Catherine shook her head, trying to get it to clear. “Yes, I want you to move so that I can leave.”

Marco laughed. “That, my beautiful mate, I will not do. Let us try again. Would you like to apologize to me for your unseemly behavior downstairs or would you like to do so once I have put you over my knee and spanked your bottom to an intense shade of red?”

“Are you fucking kidding me?” she started.

Marco grabbed her by the arm and began to march her toward the bath. He could feel her trying to fight him and reached down and swatted her backside, causing her to yelp but to move in the direction he wanted.

Once they reached the vanity, he tangled a great deal of the hair at the nape of her neck in his fist and pressed her against the vanity with his body. With the other hand, he turned on the water, wetting his hand before lathering it with soap.

“I warned you that should you continue to curse at me that I would wash your mouth out with soap. You will learn, my Catherine, that I do not make idle threats. Now, open your mouth.”

He could see her preparing to make what he was sure would be a scathing retort but as she opened her mouth to do so, he inserted his hand, wedging it into her mouth. He had done so in such a way that she could not close her jaws and bite him. He ensured that she got a good taste of the soap so that she would think twice before using such language with him again. When he removed his hand, she coughed and sputtered.

She opened her mouth to swear at him again and Marco switched hands so that the soaped hand now had hold of her hair. The other he used to strip her leggings and panties down to her mid-thigh and delivered several hard smacks to her buttocks.

“Catherine, do I need to add more soap to your mouth?”

She closed her mouth and wisely said nothing. Marco led her back into the sitting room portion of his suite. He sat down on the settee, pulling her into his lap.

“Now, my Catherine, do you have an apology you would like to offer me for your behavior?”

Marco watched her take a deep breath and exhale it slowly. “No. I want you to turn me loose, let me go and never, ever come near me again.”

Again, Marco laughed at her show of bravado for that’s what he knew it to be. He could smell her arousal and could see the tell-tale signs of it as well. Her thin shirt did little to hide the hardened pebbles of her nipples and as she sat on his thigh he could feel the evidence of her pussy’s readiness leaking out to drip onto him.

“In the years to come, my sweet mate, I want you to recall that it was your stubborn pride that led to you getting spanked prior to my bedding you for the first time.”

Marco reached between her legs and removed her leggings and panties. She now sat half naked on his lap. He couldn’t resist the urge to slip his hand between her legs to caress the hardened nub that was distended and in need of his attention. She tried to close her legs to him and he quickly and accurately swatted her soaked pussy with a satisfying smack.

“You do not ever close your legs to me. Where I choose to put my hands, lips, and cock is where you will have them. Should you be in need of them in between those times I am actively pleasuring you, you may ask. I assure you my answer will almost always be yes. Open your legs, my Catherine.”

2018-12-11
Chris
Previous: Feral: A Dark Sci-Fi Romance by Sara Fields
Next: Mastered for Their Use by Ivy Barrett