Don't Miss
Home / Blog / Claimed as Theirs by Kryssie Fortune

Claimed as Theirs by Kryssie Fortune 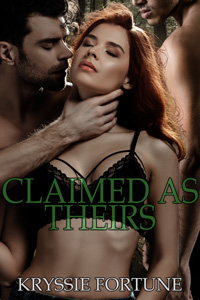 When she is captured and thrown into a cage filled with ravenous vampires, Gwen assumes she will be devoured. But among the horde is a huge, terrifyingly powerful berserker who has other plans for her. She will belong not only to him, but to all of the vampires of his triad, and her beautiful body will be theirs to use and enjoy as thoroughly and shamefully as they please.

Gwen soon learns that her new masters will demand obedience from their little human, and it isn’t long before her defiance has earned her a painful, humiliating spanking. But even with tears still running down her blushing cheeks, her helpless arousal cannot be denied, and as she is claimed and ravaged again and again her pleas for mercy are soon lost amid her cries of pleasure.

Publisher’s Note: Claimed as Theirs is a stand-alone novel set in the same world as Taken as Theirs. It includes spankings and rough, intense sexual scenes. If such material offends you, please don’t buy this book.

When Bronte slapped her ass, it surprised a yelp from her. The slow, tender way he stroked her exposed flesh set her squirming against his cock. His giant erect cock. The one she wanted inside her.

He landed three warm-up blows that sent tingles shooting through her blood. I never knew I had a submissive side, but please don’t let him stop. As if he read her thoughts, he spanked her hard and fast. Pain melted her bones and froze her brain. Helpless, she panted and wriggled as her anguished shrieks echoed around the room.

Her world narrowed into darkness, gut-wrenching sobs, and endless slaps. He spread his blows from the top of her ass to her sit spots. When he started on her thighs, it felt like a swarm of fire ants attacking her tender flesh. She wept so hard her chest hurt. She couldn’t move or hold in her anguished shrieks. All she could do was endure.

Her generous breasts swung like pendulums below her. The searing heat he built in her bottom scorched her soul. Gore inched beneath her and sucked her pearled nipple between his lips. As he licked and teased her, his hands tormented her other breast. His gentle touch contrasted with the heavy-handed slaps battering her bum. The muddled sensations added a fresh layer to the conflicted emotions powering through her.

Bronte beat a slow, steady rhythm on her posterior, turning her backside beyond painful. The third, Plato, knelt between her legs. As the spanking slowed, he fingered her puckered rear hole as he sucked at her nubbin. Horrified, she tensed and moaned. “No. Not there. I’ve never…”

This was agony and ecstasy—a forbidden delight that sent delighted shivers racing through her veins. She came in a rush of damp heat, sticky residue coating her thighs.

Plato pushed his finger through her tight rear entrance. “Relax, angel, and enjoy the ride.”

Bronte peppered more slaps on the upper curve of her bottom, careful to allow Plato free access to her naughtiest hole. Her lungs froze as a deluge of sensation hit her. Her behind burned and her bottom complained at the intrusion. As he worked his finger deeper, she squealed—but she didn’t know if it was from sensual delight or pain.

She stopped caring about who did what and accepted the delicious feelings they sparked within her. Detonation. Orgasm. A blast of pure pleasure that turned her nipples into thrumming mountain peaks. She screamed as her inhibitions melted into a puddle of goo. Much as she should hate this—and them—she loved the wanton sensations these vampires woke inside her.

She’d never imagined that three men would desire her or that she could crave them so badly. Without warning, Plato stood between her legs. His penis ripped through her hymen. She whimpered and squirmed, part in protest that he’d stolen her virginity but mostly with unexpected bliss.

2021-01-31
Chris
Previous: Alpha’s Mate: A Rough Shifter Romance by Piper Stone
Next: Given to the Highlander by Amelia Smarts and Susannah Shannon