Claimed by Daddy by Vanessa Brooks 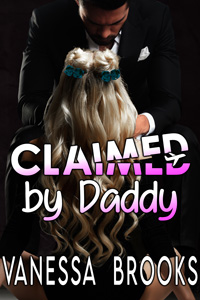 Penny didn’t know she needed a daddy… until her daddy claimed her.

After experiencing some violent turbulence during a flight, Penny West suddenly finds herself in a strange new reality, one in which she has a husband… and he expects her to call him daddy.

When his wife claims not to know him and a swat to her backside doesn’t put a stop to what he assumes is bratting, David Forrester realizes something out of the ordinary is happening. But as different as she may be from the woman he remembers, one thing hasn’t changed about this new Penny. She still needs her bare bottom spanked by a firm but loving daddy, especially when she’s naughty.

Seeing no way to return to the world as she remembers it, Penny decides there are worse things than having a distractingly handsome husband who knows how to make her scream his name in bed. But when David starts to take her in hand more thoroughly, will she resist being claimed by daddy?

“Right. On the bed.” He patted the covers beside him. Bemused, she sat next to him. He pushed her onto her back and slid an arm behind her knees, lifting her legs into the air.

“Hold them together and back,” he ordered.

She did as he asked, painfully aware that her bottom and sex were exposed to his gaze.

A strange feeling of fullness and discomfort in her bottom followed. He was moving the plug, pulling it out and pushing it in again. She whimpered, unused to the odd sensation.

“I think after the seriousness of your behaviour today I should take this ass tonight,” he said. Penny’s heart fluttered with shock.

“You heard me, Penny-pie, my cock in your tight ass, after I have spanked it nice and red that is…”

With a twisting motion he eased the plug from her anus. Gasping, her hands gripped the duvet.

Without warning a sharp thwack landed across her buttocks.

“Ow-ee, Daddy, that hurts!” she cried, flinching as she attempted to lower her legs, but his arm forestalled her action.

“Yup, the nappy position stretches your flesh rather nicely. I’m told it is more painful for a woman to be spanked this way. Next time you decide to indulge in fighting you will remember this spanking.”

The following barrage of smacks had her begging for a reprieve. He gave none. Scalding smacks rained down. These stung badly but they were nothing compared to the sting she felt when he began landing hard slaps to the tops of her thighs.

“No, not until I’m certain you have learned your lesson. I won’t have my girl, big or small, scrapping like a damned hillbilly!”

She tried to squirm away from him but he simply bent her legs back even further and carried on landing scalding thwacks to her bottom, turning the entire area of her hind end into a furnace. Tears spilled from her eyes trickling into her hair.

“Daddy, please… I am sooo sorry… Oh, Daddy!” She wailed apologies in a never-ending diatribe, yet still he spanked on. Just as she thought he would never stop, he did. Suddenly he removed his arm and her legs flopped straight down, which brought her sore rump into contact with the bed. Instinctively she rolled sideways with a yelp of discomfort. He lowered his face to hers.

“I never want to find you fighting like that again. Do you understand?”

She shifted sideways off the bed to spare her sore rump. He pulled her between his thighs.

“Part your legs.” His voice turned gruff. Her stomach tightened as she shifted her feet to comply. His hand stroked the inside of her thigh, slowly climbing to her apex. She held her breath. As light as a butterfly kiss he caressed her erect clitoris. Her sex trembled at his touch.

“What do you say to Daddy?”

Her mind struggled to reason as his fondling increased. The hand giving pleasure whipped back landing a stinging slap on the left sore buttock, focusing her thoughts.