Claimed by Her Mates by Grace Goodwin 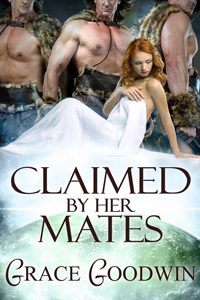 Desperate to escape a powerful man set on making an example of her for daring to defy him, Leah’s only option is to volunteer for the Interstellar Bride Program. She is assigned to the planet Viken, but upon her arrival she is shocked to discover that she has been matched to not one huge, handsome warrior, but three of them.

Drogan, Tor, and Lev were born as identical triplets to the royal family of Viken, but they were separated at birth in a last ditch effort to prevent a catastrophic war. In the years since a fragile peace has held, but now a terrible threat from deep space is growing more pressing by the day and there is only one way for the three brothers to save their people. They must take a mate and produce a sole heir to the throne as soon as possible.

Though being shared by three men is far from what she expected when she left Earth, Leah cannot hide her intense arousal as the brothers begin to teach her what it means to be mastered by warriors of Viken. It isn’t long before her hesitance to fully submit to her dominant husbands earns Leah a sound spanking on her bare bottom, yet even that shameful chastisement merely increases her desire for them. With her own future and that of the planet at stake, will she stubbornly resist her body’s demands, or will she surrender herself to be claimed by her mates?

“Will your mate need restraints?” the trainer asked.

I looked at the wall in front of me. It was covered in hooks, from which varying sizes and shapes of plugs hung down. I gulped, wondering which one Tor would pick.

Tor went to the wall and selected a small plug, something similar in size to one of his fingers, then a much larger one. Wow, that one was big, with bumps and some sort of control switch… did it vibrate?

“Leah will be a good girl and take this plug,” he showed the small one to the trainer, “without a struggle, or I will restrain her and work this one inside her.” He lifted the monster plug.

The warning was real and it was my choice.

“Here is your jar of ointment. You have enough in your hut?”

“Yes, thank you.” Tor placed it on a small table where I could see it and I watched as he coated the small plug in the slick substance. After, he dipped two fingers into the jar and moved around behind me.

The cold slide of Tor’s fingers over my bottom hole had me squeak in surprise, but I didn’t move from position.

“You can never use enough ointment,” the trainer commented.

My cheeks flushed as the trainer continued his commentary as Tor worked my back entrance, slowly stretching me to allow his finger to slide in. I panted past the burn of it and began to push back against the single digit as the sensation of being filled with the very tip of him made me instantly aroused. Just as I began to truly enjoy the fullness, the slight invasion, he slipped free.

I cried out my disappointment, but it was short-lived. The hard tip of the small plug pressed against me and slid into me without too much effort. I gasped as it was seated within and I wiggled my hips to adjust, but it wasn’t painful. Uncomfortable, surely, but nothing worse than what my mates had used the night before.

Tor came around and squatted down before me so his face was in line with mine. Brushing my hair back from my face, he met my eyes. “Good girl.” He smiled and I couldn’t help but smile back. “That was too easy though. This is training, after all.”

I didn’t have time to question his words, for he moved back behind me.

2016-04-30
+admin
Previous: Chosen by the Governor by Jaye Peaches
Next: Daddy Issues by Ava Sinclair