Claimed by the Beast by Natasha Knight 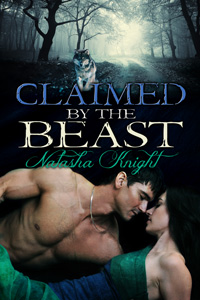 More than a year has passed since Marcus, free at last from his harsh captivity, disappeared to lead a life of solitude. Rachel waits for him, clinging to hope, but her fear grows that the man with whom she shares an unbreakable bond is lost to her forever. Despair leads her to take risks with her life, and Elijah does his best to keep her safe, but he knows that only his brother’s return can truly heal her wounded heart.

Believing that he will only bring her pain and sadness, Marcus has vowed to leave Rachel on her own, telling himself that she will move on and find love and happiness in the arms of some other man. But when the dark shadows of the past engulf his family again and Rachel’s life is put in terrible danger, he is given no choice but to return and take back what is his.

Though overjoyed that Marcus has returned at last, Rachel cannot bring herself to believe that he will truly stay this time, and her doubts push her to defy him even as he fights to protect her. She soon learns, however, that he will tolerate no disobedience when her safety is at stake, and her defiance will be dealt with firmly. As she stands before him, bare and blushing with her well-spanked bottom on display, knowing there is much more to come, Rachel longs for her mate to claim her as his and his alone. But can he shield her from those who would do them harm, or will he be torn away from her yet again?

“Two,” she managed, her voice panicked. It was then she realized the hardness her belly was pressed against wasn’t his thighs. He was enjoying this! He was turned on by it! “Three, four, five,” she continued, each time exhaling a breath, a grunt. She closed her eyes when he paused, anticipating each spank, counting each one. The ones at the crease between her bottom and her thighs were the worst, and she was grateful every time one of the thirty was over.

She hadn’t realized she had tightened her muscles and glanced back over her shoulder for a moment, watching his face as he waited, his eyes on his mark, his hand rubbing a slow circle. Fifteen to go, she could do this. She turned her face back into the cushion and softened.

“Good girl, punishment is almost over,” he said. The last fifteen came hard and fast and he seemed to focus on the area that hurt the most.

Once she called out the last number, she exhaled, her body going limp. He released her wrists and she took them to her face while he caressed her bottom. After a few moments, he lifted her to sit on his lap but she couldn’t look at him. Instead, she buried her face in his shoulder.

She clung to him, trying to make herself smaller as he wrapped one arm around her.

She pushed her face deeper into him as tears came. It seemed as though she couldn’t stop crying and no matter how much she tried, she couldn’t get close enough to him.

After a while, he forced her face up with both hands. Wiping her tears with his thumbs, he kissed her hard, his eyes still open looking into hers, while he rose to his feet, lifting her with him. She kissed him back and he laid her down, still kissing her while undoing his jeans. When he’d freed his cock, he tried to push her legs apart but her jeans were still around her ankles. He let out a groan of frustration when she reached for him, wanting him. He flipped her onto her belly and lifted her by her hips so she knelt at the edge of the bed. He then pulled her bottom cheeks apart and in the next instant, thrust his cock deep inside her pussy. He fucked her hard, harder than he had last night. Reaching a hand to take her clit in one hand, he held her tight with the other. The heat of her spanked bottom coupled with the heat of her wet pussy. His fingers roughly rubbed her clit, stretched it while their combined moans filled the room and her pussy clenched around his throbbing cock as he pumped his seed into her.

2013-12-18
+admin
Previous: The Art of Discipline: Dani’s Discovery, The Mockingbird Chronicles, Book One by Stardawn Cabot and Alexandra James
Next: Claiming Sarah by D.W. Collins