Claimed by the Beasts by Piper Stone 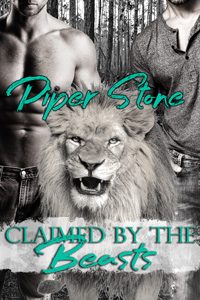 Investigative journalist Scarlet Dumane has spent years hiding from the truth about herself, but now her grandmother’s death under suspicious circumstances has brought her home to the bayous of Louisiana and she must face her fate, no matter how shameful and terrifying.

Though she has done her best to run from it, Scarlet cannot escape what is in store for her. She is destined to be claimed, not by one savage beast, but by three. Her mates will own every inch of her, and her beautiful body will be shared and used as roughly and as often as they please.

She will be a queen, but her mates will be her masters, and defiance will be punished. Yet even when she is stripped bare and spanked until she is sobbing, her need for them only grows, and every blush, moan, and quivering climax binds her to them more tightly. But with enemies lurking in the shadows, can she trust her mates to protect her from both man and beast?

Publisher’s Note: Claimed by the Beasts includes spankings and sexual scenes. If such material offends you, please don’t buy this book.

Scarlet sensed they were no longer alone, gathering a scent of Bristol and Trevor. She kept her eyes closed as they approached, her skin even more alive. A hushed set of whispers was almost inaudible, the husky sound so sensuous. Soothing. The air in the room had taken on a different vibe, enriched by testosterone, electrified by their presence.

Her other two masters.

They were here. In this room. And they would take her.

As hands removed her shoes, her shorts and panties, Larken broke the kiss, licking around her lips as a guttural sound floated from his throat.

“You belong to us now and for always,” Larken whispered, his lips barely touching the side of her neck.

“Yes.” She was aware her shirt had been removed, heated fingers unclasping her bra. When she was fully naked she was guided into a standing position, surrounded by all three lovers.

Their animalistic grunts and growls were the opposite of the tender touch of gentle caresses at her neck, arms, and stomach. She had never felt so adored, almost worshipped.

They continued their exploration, strong hands gripping her hips, sliding down to cup her reddened ass cheeks, fingers pressing until finding her asshole. Yet another set of hands cupped both breasts, flicking fingers across her already hardened nipples.

“And we will train you, keep you obedient,” Trevor murmured.

Adrenaline created a rush in her pulse, her heart skipping as Larken kneaded her stomach, crawling his fingers down to the area just above her pussy. “Open your legs.”

The command was laced with darkness and she did as she was told, sliding her feet apart. Fingers were roaming down the insides of her thighs, tickling her skin. Another pulsed in and out of her dark hole, forcing her to pant, swaying forward and backward. “Oh!”

“Imagine all three cocks filling you, claiming you,” Larken breathed as he cupped her cunt, rubbing up and down, creating a wave of friction.

“Yes. Yes…” she whimpered, almost stumbling forward. The change in Larken’s voice, gravelly and dripping with longing, was sweet music, encapsulating her very soul. Opening her eyes, she was able to see her reflection in Larken’s golden irises, and instead of being afraid, she was mesmerized.

Larken rubbed his open mouth across her jaw, tugging back her hair and exposing her neck. He kept the low keening sound as he slid his lips down to her neck, nipping her tender flesh.

“Oh, God…” Breathless, she longed to reach out, to touch them but knew she was required to stay in position. Her toes curled as Bristol lapped at her pussy, darting his tongue just past her swollen cunt lips. Their fingers never stopped caressing, driving her into a frenzied state, her dark desires turning carnal.

She was no longer certain who was touching her where, her skin prickling, heated to the point of being on fire. Yet fingers were swirled around her clit, once, twice then a hard pinch, driving her onto her toes, her mouth open in a perfect ‘O.’ Everything was distorted as the rubbing became more intense, as if their needs were insatiable.

“You will not come without permission.” Larken’s command was without question to be obeyed.

2018-09-21
Chris
Previous: Mastering His Mate: An Alpha Shifter Romance by Delta James
Next: Chosen for Their Use by Ivy Barrett