Claimed by the Clan Chief by Lily Harlem 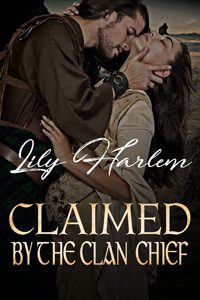 After Isla Dunoon is saved from a man’s forceful, unwanted advances by Trevor McTavish, the leader of the Highland clans, she cannot help falling for her rescuer. But when she is caught with something she stole from Trevor in order to cast a spell she hoped would endear him to her, Isla quickly discovers that not only is the stern, handsome warrior already entranced by her, he will not hesitate to spank her bare bottom hard and thoroughly when her behavior makes it necessary.

Though Trevor soon takes Isla as his wife and claims her properly, it isn’t long before her spell-casting attempts attract attention and put her life at great risk. He punishes her strictly and shamefully in an effort to tame her recklessness, but will his efforts prove to be in vain?

Publisher’s Note: Claimed by the Clan Chief is a stand-alone sequel to Owned by the Highlanders. It includes sexual scenes and spankings. If such material offends you, please don’t buy this book.

He gave her five more swats then rested his hand over her ass. She was breathing fast, her ribs expanding and contracting quickly. He, too, was a little breathless. His cock was hard, pushing at his kilt. He wondered if she could feel it against her side.

She moved her hand as though to sit.

“Have I said this is over?” He pressed her down.

“No.” She sniffed and he wondered if she was crying. If so then perhaps it had come to an end. He’d heated her flesh enough if tears were falling.

He studied her rump. Aye, it was glowing indeed. He was sure it would be visible even in a darkened room.

“You’re taking your first spanking well,” he said, sliding his fingers down the crease of her buttocks.

“Thank you.” Her legs relaxed, her toes resting back on the floor whereas they had been hovering several inches from it.

“I can see your bottom is red and sore, but what other effects has it had on you?”

“Good, but not quite what I meant, sweet wife of mine.”

He’d delved lower, slipping two fingers to her warm pussy. She was wet and his skin glided against hers.

He smiled down at her. Wee minx had squealed and kicked but heating her ass had also created heat in her cunny.

Pushing inside her, he found the delicious dampness of her arousal and was rewarded by a small moan rumbling from her throat. That was a sound of pleasure, not of pain or humiliation and it pleased him.

He tilted his fingers and rubbed her deep inside, loving how she gripped him with her internal muscles and yet another moan rolled from her mouth.

Oh, yes. She was as aroused as he was hard. Which just proved what a good match they were.

He reached for her hair with his free hand and gathered it into a rough ponytail.

She raised her head when he tugged, her back arching.

He admired the delicate shape of her neck, shoulders, and spine. Tipped over his lap like this, she was indeed a rare beauty.

He continued to work her pussy, the soft sounds of her pleasure filling the room and speeding his heart. Soon he’d take her, but not yet, he had other plans.

He withdrew and slid his touch upward a fraction, to the small pucker of her anus. Pressing at the very centre he gained a tiny bit of entry.

“Oh! What are you…” She tried to squirm away but he held her secure.