Claimed by the Commander by Sassa Daniels 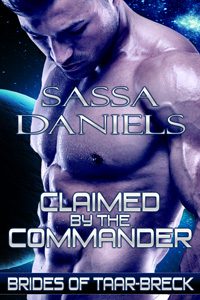 After she is caught with forbidden literature, twenty-year-old Caroline Chatterton is arrested and brought before Earth’s corrupt, tyrannical High Council, but she is saved from a harsh sentence when Commander Andrew Rossingham of Taar-Breck claims her as his bride based on the terms of an agreement made years ago by her grandfather.

Before she kneels at Andrew’s feet to speak her wedding vows, however, the High Council requires that Caroline submit to both an intimate, humiliating medical exam and a shameful public spanking at the hands of her future husband. But though the punishment leaves her blushing crimson, when Andrew takes her in his arms and masters her completely she cannot deny her body’s response to his stern dominance and skilled lovemaking.

During the journey to Taar-Breck, Andrew begins the process of teaching Caroline obedience, and after she sneaks away in an effort to avoid a well-earned spanking she learns the hard way that naughty wives have their bottoms punished both inside and out. But with the High Council still seeking to hunt down her friends back on Earth, can Andrew tame his headstrong bride’s reckless behavior before she puts herself in danger yet again?

Publisher’s Note: Claimed by the Commander is a stand-alone novel which is the first book in the Brides of Taar-Breck series. It includes spankings and sexual scenes. If such material offends you, please don’t buy this book.

“Untie me this instant, you… you… ruffian!”

“Ruffian?” Rossingham threw his head back and laughed. “Oh, Caroline, you really are a little hellcat, aren’t you? I can only hope you’ll be this entertaining in bed.”

Caroline blushed furiously as, clearly less amused by her outburst than the commander, the doctor stepped forward.

“I can see that additional restraints are required here.” Even as he spoke, the older man was drawing a thick strap of brown leather across her torso, just beneath her firm, rounded breasts. Once it was securely fastened, he drew another, thinner band across her upper chest and buckled it tightly in place. If movement had been difficult before, it was impossible now. Whatever they planned to do to her from this moment on, she would not be able to escape any of it.

Caroline sobbed helplessly at the thought of the sight she presented, not just to the doctor and the man who had come to claim her but to the Council members who, the airborne camera reminded her constantly, were watching in some nearby room. No doubt they were enjoying every moment of her humiliation. Thinking about them salivating over her abject misery made the tears fall harder and faster. She felt so exposed lying there, her thighs spread apart, her glistening pink pussy and the little pucker of her bottom hole on display. Her breasts were obscenely framed by leather bonds and, with her arms stretched above her head, they were pulled up into taut little mounds.

“Before you begin the next stage of the examination, Doctor, perhaps you would be good enough to remove this unsightly mess for me.”

“No,” Caroline wailed in protest as she felt him tug at the dark tufts of hair that were her one remaining defense against complete exposure.

“Hush, Caroline,” Rossingham said, the words soft, the look in his eyes beseeching but the command unmistakable.

“Perhaps I should gag her for the rest of the examination,” the doctor said, clearly growing increasingly irritated with her attempts at resistance.

At the thought of being forcibly silenced, Caroline let out another long howl of distress.

“That won’t be necessary.” Rossingham looked down into her eyes, which were wide with panic. “Will it, Caroline?”

“No, Commander Rossingham,” she sniffed. “Thank you.”

Her gratitude was genuine and she quickly brought her sobbing under control, knowing that he could easily change his mind if she pushed him any further.

“Good girl.” Rossingham’s praise gave her some small comfort. He patted her thigh affectionately and it helped her to relax a little.

A few moments passed and then she felt a slight tingling on her feminine mound as the doctor used a small laser to permanently remove every last trace of hair from between her legs and around her bottom hole. Now fully denuded, she felt as though every part of her had been laid bare, but she managed to hold back from bursting into tears once more. Knowing that those bastards who sat on the High Council were witnessing every second of this degradation, she had to salvage some dignity. Taking a deep breath, she steeled herself for the next phase of this highly personal inspection.