Claimed by the General by Sara Fields 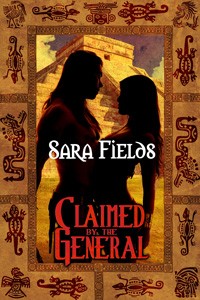 When Ayala intervenes to protect a fellow slave-girl from a cruel man’s unwanted attentions, she catches the eye of the powerful general Lord Eiotan. Impressed with both her boldness and her beauty, the handsome warrior takes Ayala into his home and makes her his personal servant.

Though Eiotan promises that Ayala will be treated well, he makes it clear that he expects his orders to be followed and he warns her that any disobedience will be sternly punished. Lord Eiotan is a man of his word, and when Ayala misbehaves she quickly finds herself over his knee for a long, hard spanking on her bare bottom. Being punished in such a humiliating manner leaves her blushing, but it is her body’s response to his chastisement which truly shames her.

Ayala does her best to ignore the intense desire his firm-handed dominance kindles within her, but when her new master takes her in his arms she cannot help longing for him to claim her, and when he makes her his own at last, his masterful lovemaking introduces her to heights of pleasure she never thought possible.

But as news of the arrival of an invader from across the sea reaches the city and a ruthless conqueror sets his eyes on Ayala, her entire world is thrown into turmoil. Will she be torn from Lord Eiotan’s loving arms, or will the general do whatever it takes to keep her as his own?

“Do you understand why I must do this?” Lord Eiotan said softly, his grip offering her a sense of safety.

“Yes, sir. I do. Please, I am so sorry. I should have listened to you. If you hadn’t found me, I don’t know what would have happened.” Ayala felt the hem of her dress raise, chilly air ruffling against her panty-clad backside. A tiny quiver ran through her.

When the first slap fell onto her left cheek, Ayala yelped. She squeezed her eyes shut, determined she would take this well, since she knew she deserved it. The second spank fell in the same spot. She gritted her teeth. After that, Lord Eiotan began to spank Ayala in earnest. Each one came harder and faster, much more punishing than last night’s warning. His hand seemed harder, carrying an emanating heavy sting with each spank.

Ayala hollered as the spanking grew in intensity. Pitiful cries began to emerge unwittingly from her throat. This really hurt. The only thing she could concentrate on was the spanking, how much it hurt and how embarrassing it was that she had to be taught a lesson by being given a spanking over Lord Eiotan’s knee.

Each spank lit a new fire into her backside. He spanked her upper and lower cheeks, not even leaving her upper thighs untouched. Ayala was whimpering when the spanking paused.

She used the respite to catch her breath. She had taken her spanking thus far fairly well. Maybe he would offer her forgiveness.

She felt his fingers trace the heat emanating from her bottom, up to the waist of her panties. When she felt his fingers curl around them, panic raced through her. She reached back, trying to catch them. “Please don’t,” she cried out.

He quickly pulled her panties down, his other arm grabbing her reaching arm. Ayala struggled, terribly afraid, embarrassed and ashamed.

He couldn’t mean to punish her further. “Please, that’s enough, sir. I have been punished enough already!”

He renewed spanking her with a new vigor. The sting was stronger on her bare bottom.

“You, young lady, do not decide when your spanking is over. I do. You are a very naughty girl who needs to be punished for misbehaving. Tonight, I will teach you exactly who is in charge.”

2015-10-17
+admin
Previous: The Demon’s Woman by Melody Parks
Next: The Admiral and the Orphan by Chula Stone