Claimed by the Kings by Loki Renard 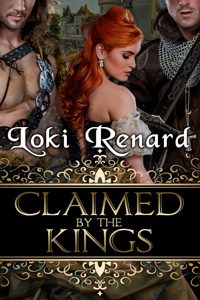 After her homeland is conquered by two powerful kings, eighteen-year-old Princess Elizabeth of Ammerdale finds herself taken captive in her own castle. Rather than fight over her, the two rulers decide to form an alliance and claim Elizabeth as their shared bride, but they quickly discover that the beautiful maiden will need to be tamed.

Though they have little else in common, the sophisticated Milo Lionheart and the fierce warrior Ragnar are united by their willingness to strip Elizabeth bare and spank her soundly as often as necessary to teach her obedience. Despite her blushing protests, the stern dominance of her handsome husbands arouses the young princess deeply, and soon she is begging for more as their masterful lovemaking brings her to one shattering climax after another.

Not everyone in Ammerdale is happy with the match, however, and when a treacherous foe seeks to seize the throne for himself it puts the growing bond between Elizabeth, Milo, and Ragnar to the test. Will the two kings stand together to protect their realm and their woman?

Publisher’s Note: Claimed by the Kings includes spankings and sexual scenes. If such material offends you, please don’t buy this book.

“You will speak respectfully,” Milo lectured as Ragnar thrashed her. “You will mind your tongue and you will accept that there are consequences for disobedience. You are ours, princess, and we have expectations that will be enforced in ways you will not enjoy.”

It was rather a redundant statement, given that her bottom was being soundly and relentlessly belabored with her own footwear by a barbarian more than twice her size.

“Naughty girl,” Ragnar added, standing erect to survey the results of his handiwork. Elizabeth didn’t know what her bottom looked like, but it felt hot and swollen and she could feel the sting somehow still singing on even though Ragnar had put the slipper down—and picked up the belt.

Ragnar doubled it over, snapping the leather against itself with a loud crack that made her cringe. His dark eyes were lit with purpose that would not bend to her pleas. Elizabeth reached back to cover her bottom with both hands and simultaneously squirmed up onto her knees so she could face them.

“This isn’t fair,” she said. “I mean, it’s not, is it?” She looked at the two kings with a desperation in her eyes that did not do a thing to dissuade them. “What are you punishing me for? What did I do that was so wrong? I went to the market, I returned…”

“Bend over and present your bottom,” Ragnar snapped.

She focused the entire intensity of her dismay upon him, her green eyes filling with tears. “Please… Ragnar… I have done all you asked of me.”

“You have fought us from the moment we walked in here,” Ragnar said mercilessly. “Bend over, princess.”

She hoped her feigned obedience would earn her some mercy as she turned around and bent over so that her bottom was high and her head was low.

The first crack of the belt against her bottom took her breath away. Ragnar wielded the thing with what felt like the full force of his arm and to Elizabeth’s senses it was as if cannon fire had burst across her cheeks in a blazing salvo that made a cry burst forth from her lips.

He laid several more like it across her cheeks, striping from the top of her quivering bottom to the top of her thighs. She lost the ability to retain position within a stroke or two and thereafter simply writhed upon the bed, her legs scissoring and flailing in a futile attempt to discharge some of the heat and sting.

“She’s wet,” Ragnar declared suddenly, tossing the belt to the side.

2016-12-03
+admin
Previous: Sentenced to the Nursery by Carole Archer
Next: Claimed by the Machine by Emily Tilton