Claimed by the Machine by Emily Tilton 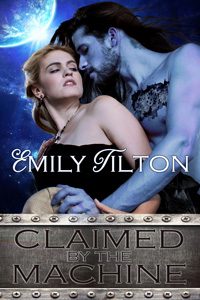 Sala has encountered plenty of exotic men while working at the Guesthouse, a luxurious brothel catering to the unique needs of rich and powerful individuals whose travels bring them to the planet Magisteria, but she has never met anyone like Alpha before.

The huge blue alien is stunningly handsome, but he is no ordinary customer. He is a sentient machine with the body of a man, a representative of a vast shared consciousness with an interest in discovering the nature of dominant human sexuality, and Sala is the submissive girl he plans to make his own. Soon she has been stripped bare, spanked thoroughly, and mastered completely, but will the intensity of their growing passion for one another turn out to be more than the collective mind can handle?

Publisher’s Note: Claimed by the Machine includes spankings and sexual scenes. If such material offends you, please don’t buy this book.

Then he pointed again to her bottom more insistently, so that she felt the heat come into her face. “Why?”

“I don’t always pay attention the way I should, sir,” she said, feeling the prickling of tears in her nose. For some reason she wanted him to… I want him to think well of me, she realized—the same way she wanted to please the director, but with much, much more force.

Then a crazy thought surfaced. I’m representing my entire species.

The director had stepped back when the alien—Alpha—stepped forward, to allow the blue man free access to Sala’s body. Alpha: so very appropriate that if Sala had heard about this scene from someone else she probably would have giggled. Nothing seemed humorous about it now; he stood only a pace away from her, looming over her so high that he seemed to cast Sala into shadow. She swallowed hard yet again.

He turned his attention to the director. “How often?”

“How often do I whip her, Mr. Alpha?” the director asked smoothly. “Once a week, I suppose. Our girls generally receive discipline about that frequently, but you and your associates may punish them more if you like. Of course the attendants will pay close attention to make sure no injury occurs.”

Sala saw a strange new expression pass across Alpha’s face, then, and he shook his head. “No hurt,” he said, looking right at her. “Punish. For your good.”

Her pussy contracted, and she bit her lip at the sensation. The tiniest of whimpers escaped her throat.

“Exactly,” said the director. Sala though she heard some surprise in his voice, though whether at Alpha’s stringing together more than two words or at his apparently instinctive grasp of ethical dominance she couldn’t tell.

Nervously, involuntarily, Sala turned her face to look at the director. He regarded her with a little impatience. It wasn’t unknown for the first sex or discipline of a guest’s stay to occur in the lobby, but it was certainly unusual: most guests chose their girl or girls from the menu in the guestrooms, and then the director or another attendant brought their selection to their room. Of course, Sala couldn’t know exactly what Alpha intended, but she didn’t have much doubt. Her anxiety about the strange situation combined with her frank fear of his enormous cock, to make her less certain than she should have been.

“Do as Mr. Alpha says, Sala,” the director said sternly. “I think you just earned a spanking for that hesitation.”

Sala bit her lip and turned back to Alpha, who regarded her with a matching severity. “Yes,” he said. “Spanking soon on your bare bottom, with your panties down.”

2016-12-10
+admin
Previous: Claimed by the Kings by Loki Renard
Next: Her Outlaw Daddy by Jane Henry