Claimed by the Mountain Man by Amelia Smarts 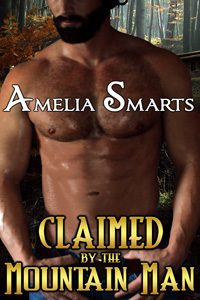 Times are hard in Montana in the mid-1800s, and when Nettie finds herself impoverished, desperate, and alone after the death of her husband, she flees the town of Helena to escape the clutches of the local saloon owner. But living off the land quickly proves much more difficult than she’d hoped, and after days without food she resorts to stealing from Jack Abrams, a gruff mountain man and trapper who lives a secluded, uncomplicated life in the woods.

Jack doesn’t take kindly to being stolen from and when he catches her red-handed, Nettie ends up lying naked over his knee for a long, hard spanking. To her surprise, however, after her punishment Jack offers her food and shelter in return for cooking, cleaning, and doing as she is told. But Nettie is determined to never rely on a man again, and with a belly full of food and renewed determination, she abandons him to take another shot at living in the woods on her own.

Jack knows the headstrong girl won’t survive without his help, especially when she chooses a grizzly’s winter cave as her shelter, and he can’t stand by and idly watch her demise. When his irritation with her foolish pride boils over, he decides it is time to show her how thoroughly a man can dominate a woman silly enough to venture into the woods alone. Jack’s stern chastisement and bold mastery of her body leave Nettie begging for more, but is she truly ready to give up her freedom to be claimed by the mountain man?

“I’ve been too easy on you.” He pinched her peaked nipple through her shirt, with enough pressure to make her cry out. “You think there’s no cause to fear me, but you’re wrong about that.”

Nettie closed her eyes. She felt frantic with lust. She needed his whole body to press against hers. She wanted him to kiss her as roughly as he was speaking to her. “Why do you want me to fear you?” she asked in a tremulous voice.

Jack released her wrists. She felt bereft of his touch when he took a short step back, but that feeling didn’t last long. He took hold of her arm, dragged her to the bed and shoved her onto her stomach. He yanked down her trousers and ripped off her drawers with terrifying speed. With lengths of rope he’d apparently picked up on the way to the bed, he bound an ankle to one bedpost and repeated the motions for the other. It happened so fast and came as such a surprise that it didn’t occur to Nettie to try to break free until it was too late—not that she would have been successful, had she tried.

He pulled her hands forward and tied them to the bed as well. There she lay, spread eagle and naked from the waist down. Her open legs allowed a breeze of cool air to brush her sex, and the muscles there constricted, desperate for something to fill it.

Before she knew it, she was alone in the cabin. Jack had left her there, and she had no idea where he went or when he would return. Her heart beat heavily in her chest. After what seemed like an eternity, the cabin door opened, and what she saw sent her heart racing even faster. In his hand was a switch the length of her arm and the width of one of her fingers. Her stomach flopped as he approached her. “Please, Trapper Jack. Why are you doing this?” she whispered.

Instead of answering, he snapped the switch across the low curve of her bottom. It caused a pain like no other, and it intensified in the seconds after the blow. She screamed and twisted, but her binds didn’t allow her to move hardly at all.

He gave her another lick, this time across her upper thighs. The burn was sharp, searing, unbearable. She screamed again. She didn’t think he’d heard her question until she heard his explanation through the pain.

Nettie wailed. She pressed her pelvis into the bed, her body involuntarily and uselessly trying to shrink away from the fierce burn. Tossing the switch aside after the seven licks, he leaned over her and grabbed the back of her neck. She felt his hot breath on her ear. “You should be afraid, woman. Those who don’t fear nature die. Fear is useful. Pride is not.”