Claimed by the Omega by Kallista Dane 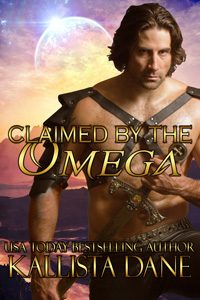 After a painful breakup, Maia O’Connell wanted to be as far away from Earth as possible, so she volunteered to use her skills as a Healer on an interplanetary mission. But when she emerges from her slumberpod, she discovers that the planet she was headed for was destroyed by an unknown enemy and her ship has been hurtling into unexplored space for the last hundred years.

When her ship is boarded by aliens, Maia has no choice but to hope for the best. Though it quickly becomes clear that the aliens will do her no harm, she soon finds herself blushing crimson as she is subjected to a humiliating medical examination and then brought to one helpless, shameful climax after another as her body’s responses to sexual stimulation are tested.

Kadan is an Omega, one of the elite warriors sworn to defend the Seven Stars, and when a terrible enemy of unimaginable power threatens his world he is sent on a desperate mission to defeat it and save his people. Encountering a stranded ship on the way to battle is an unexpected distraction, but when he comes face to face with Maia he recognizes her instantly.

She is the companion the Oracle foretold would accompany him on his quest, the woman he saw in his dreams writhing in ecstasy as he mastered her beautiful body completely. But though his stern dominance leaves her all but quivering with need, Maia will not be easy to conquer. Can Kadan claim his little human’s heart even as he fights to keep both her and his entire world safe?

Publisher’s Note: Claimed by the Omega: A Sci-Fi Alien Romance includes spankings and sexual scenes. If such material offends you, please don’t buy this book.

“Now you will be taken to the cleansing area.”

Cleansing. She sighed in relief. That sounded harmless enough. She desperately needed a shower. Maybe even a nice relaxing bath.

Two of them carried her into a small white cubicle, one taking her arms and the other her legs. They strapped her into a sling hanging from the ceiling. A wide band secured her around the waist. Other bands wrapped around her thighs and upper arms. One last strap ran behind her head, supporting her neck. Dangling four feet off the floor, stark naked, Maia’s heart sank. This wasn’t going to be a relaxing bath after all.

They began pulling hollow tubes out of the walls, positioning them a few inches away from her so the openings pointed to various places on her body. But when one of them adjusted the bands to pull her legs wide apart and then stepped between them with the end of another tube, she began bucking and yelling again.

The harsh sound echoing off the bare walls was as shocking as the sudden lick of fire on her bottom. She bit off another cry and whipped her head around, coming eye to eye with their leader standing behind her.

He stared back, his eyes cold, then delivered four more strong whacks. With his large hands, every stroke covered her entire backside. He’d turned up the sensors on the finger pads of his gloves, so not only did she feel the impact on her bare skin, his punishment carried a shocking tingle deep into her bottom.

She gasped, then let out a shriek. “You said there wouldn’t be any probes!”

He started spanking her in earnest.

“You… will… be silent. You… will not… move,” he ordered, punctuating his words with more stern whacks. “These are not probes. They are hoses. We will monitor your responses while they deliver the cleansing solution to your entire body, inside and out.”

The tingling sensation became a fiery sting, spreading through her bottom. Maia bit her lip to keep from crying out again, but tears welled up in her eyes. She’d heard of spanking. An ancient form of discipline Earther parents once doled out to naughty children. She had no idea it was so painful. Back home, this beast would have been removed from society and sent to reprogramming therapy.

The humiliation was nearly as bad as the punishment itself. She was completely helpless. Strapped into the harness naked and spread-eagled, with her burning bottom exposed for him to spank as long and as hard as he wished while the other two looked on. She did her best to endure it all without straining at her bonds or making another sound, hoping he would decide she’d learned her lesson.

Finally he stopped. She sagged in the sling, eyes half closed. He came around in front of her, stepped between her thighs, and held up one of the gray tubes. Watching her face carefully, as if daring her to disobey his commands again, he reached out. She cringed with embarrassment when he spread apart her labial folds with his gloved fingers and slid the open end of it inside her.

2017-05-22
Chris
Previous: The Alien’s Patient by Loki Renard
Next: Training His Mate by Samantha Madisen