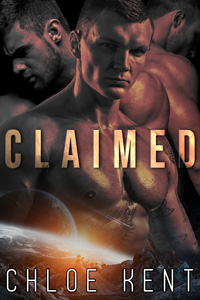 They bought her. Now they will breed her.

Even with Earth devastated by an asteroid impact and a tyrant ruling with an iron fist, Skyler Williams is still shocked when she suddenly awakens on another world, naked and on display for three alarmingly sexy aliens. Her captors make it clear that they expect to be obeyed, and she quickly discovers that even the slightest defiance will earn her a painful, humiliating spanking.

But she was not brought to their world merely to be used for their pleasure. She was sold to them by Earth’s corrupt government, and her new owners plan to breed her, taking her over and over as they seed her with the offspring that they hope will begin to rebuild their population. The only thing left for her to decide is how sore her bottom will be when she finally surrenders to her body’s demands and begs her masters to claim her as roughly and shamefully as they please.

He took her by surprise and pushed deeper into her, gagging her, and nothing felt more delicious then the spasms erupting from her pussy. She kept her breaths measured and didn’t panic as he entered her throat, him keeping her in place with the hand in her hair. His gaze washed over her, and in her heart, she poured out a thousand apologies. And all her love.

“There’s not going to be a part of your body we don’t own,” he said darkly. “No part of you that we don’t touch, don’t fuck.”

Wistan stood as if on cue, the same moment as Airyck slid his cock out of her mouth then picked her up. He sat her down on his lap, astride him. Her breasts flushed as he hungrily engulfed a nipple into his mouth. But more tears dripped from her eyes as he reached around her and breached her most private opening with the thickness of his thumb without any kind of lubrication. She bit the side of her cheek to stop from crying out from the stinging pain.

“You underestimated us, girl. And for that you will be punished,” he said slowly, pushing into her hole harder and rougher until she tried to wriggle away from him. The pain, so blunt as he stretched her with the complete thickness of his thumb, had her pussy shamefully dripping wetness onto his cock.

Looking at her with his stormy eyes, he swiped at the drops of her arousal, as if he knew the exact spots on his cock she touched with her wetness, without having to see it.

She lowered her own eyes as he licked off the dew, the act so intimate and yet also such a powerful statement. Her body betrayed her, siding with them, in spite of knowing they only needed her now for the antidote. And nothing else.

They thought she had been in on this from the start. Part of her just wanted to scream at them to take the antidote from her body and leave her be. But no. They meant to humiliate her, drag out her own degradation with orgasm after orgasm until there was nothing left of her.

Airyck removed his thumb from her ass and her hole immediately shut closed after the violation that had her whole body on fire.

“On your hands and knees,” Airyck said. “Ass facing me.”

She turned to see Drykin singlehandedly carry a bench to where Airyck sat with her in his lap.

“Now.” His command ricocheted across the room and startled her. She climbed off his lap and onto the bench. She wet the leather-like material with both her tears and the drizzle from her pussy which continued to leak from her.

Drykin and Wistan came to stand before her. They hadn’t removed their pants, merely parted the fronts so they could pump their cocks at the sight of her.

Airyck’s body heat shrouded her, laying a hot shadow across her back as he towered over her from behind.

How was she going to survive this?