Don't Miss
Home / Blog / Claimed for Their Use by Ivy Barrett

Claimed for Their Use by Ivy Barrett 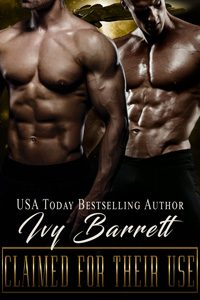 Held captive by a brutal drug cartel and facing an uncertain fate, the last thing Jessica Saint Claud expects is to be rescued by two huge, fiercely handsome alien warriors, but the real shock comes when the two Ventori commanders make it clear that she now belongs to them. They will use their beautiful little human as thoroughly as they please, and she will submit or be punished.

To Jessica’s surprise, her body responds powerfully to their bold dominance, and it quickly becomes clear that she is an ideal match for them both. As their primal need for her grows stronger, her new owners cannot resist taking her over and over in the most shameful of ways, wringing more pleasure from her naked, quivering body than she would have thought possible.

But when Jessica’s impetuous behavior leads the Ventori High Council to demand a demonstration of her suitability as a mate, she soon finds herself blushing crimson as she is stripped bare, soundly spanked, and then claimed publicly by both of her masters at once.

Publisher’s Note: Claimed for Their Use is a stand-alone novel which is the second book in the Ventori Masters series. It includes spankings and sexual scenes. If such material offends you, please don’t buy this book.

“Is this pussy ours to enjoy?” Dare asked, his tone nearly as gruff as Rook’s had been. Perfect. Now she had two cavemen. “Can we touch and kiss and fuck you whenever we want?” His hand shuttled back and forth, pumping his fingers in her aching passage. God, how she needed his cock there, stretching her, filling her, making her scream with release.

“Yes,” she whispered, no longer willing to pretend this wasn’t what she wanted.

She’d already agreed. Why did Rook have to push things ever farther? She might enjoy their demanding focus, but she wasn’t a mindless slave.

“She’s still resisting.” Rook’s disappointment stung like a lash. She could match anger for anger, but this made her feel like she’d failed. “Turn her over.”

“No! I’m not resisting.” Even as the words left her mouth, she kicked at them, twisting and struggling as they flipped her over. They positioned her as easily as if she’d allowed each movement. She soon found herself on her knees, head and shoulders lowered toward the bed. Her hips were raised, ass in the air, legs wide open. They each straddled one of her legs, holding her in place with their knees. Rook gripped the back of her neck, ensuring she kept her torso down.

Fingers slipped into her pussy and began a smooth, slow fucking. “Now say it,” Rook ordered. “‘My pussy belongs to you, Sirs.’”

“My pussy belongs to you, Sirs,” she recited in a soft monotone.

The fingers suddenly withdrew and the same hand spanked her upturned ass. She gasped then glared at Rook, knowing without doubt who was touching her.

He spanked the other side, then swatted her pussy.

She cried out as heat crawled across her ass cheeks and sank into her core. An intoxicating combination of desire, anger, and shame twisted inside her, confusing and arousing her. Both areas were already tender from his earlier chastisements. Then his fingers thrust back into her pussy, fucking her fast and hard. He staked his claim, proving his point in the most direct way possible. She no longer had control of her body. She had signed it over to them. The thought should be terrifying, yet she felt calm and strangely empowered.

She closed her eyes and pretended he knelt behind her and that his cock was working her just as ruthlessly as his fingers. Despite her outward reluctance, she needed him there, riding her hard and fast, offering no mercy. They’d barely begun to train her—and that’s what this was, they were training her—she had already known more intense pleasure at their hands than with any of her human lovers. As if to prove her point, an orgasm raced toward her and her inner muscles tightened spasmodically.

“Not yet,” Rook snapped, then someone spanked her hard, alternating sides, quickly driving back her release. Rook was holding her down with one hand and fucking her with the other, so Dare must be spanking her. He might smile and joke more often, but he was every bit as dominant as his brother. Dare’s slaps weren’t quite as hard as Rook’s had been, but Dare paused between each swat to stroke her burning cheeks. The caress spread the heat and gave her time to fully absorb the pain before he delivered the next set of swats.

She trembled, body tense and needful, emotions surging wildly. She felt out of control, lost, her frame of reference shattered. “I’m sorry.” The apology tore from her throat, accompanied by a harsh sob. She was confused and angry, and needed to come so badly her abdomen was cramping.

2018-03-30
Chris
Previous: The Wolf’s Demand by Maggie Ryan and Shanna Handel
Next: Protected by the Scotsman by Katie Douglas