Claimed on the Frontier by Jane Henry 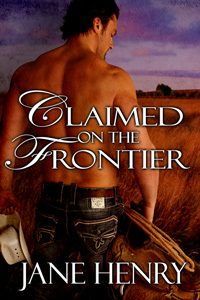 Pearl has fended for herself since she was orphaned at a young age, but on the night she meets Aaron Stanley her life is thrown into chaos. The handsome pioneer and his brothers are headed west to stake their claim on the frontier, and when an unfortunate turn of events leaves Pearl without a roof over her head it is Aaron who comes to her rescue, offering to bring her along provided that she agrees to mind him.

As they begin their journey, Pearl soon discovers that Aaron is a force to be reckoned with. Though he quickly proves more than willing to take her over his knee for a sound spanking when her behavior warrants it, she is drawn to his stern, uncompromising dominance, and when circumstances force them into a hasty marriage she is happy to promise him her obedience.

Despite her headstrong nature, Pearl finds herself submitting willingly to her new husband’s mastery of her body. But even as their passion blossoms into love, Aaron is determined to be as firm as necessary to keep his bride safe in a hard, dangerous land. Can their bond survive the harsh realities of life on the frontier?

A finger under my chin, his voice was both stern and gentle when he spoke. “Enough now, little one.”

Little one. Something in me warmed to that, and I swallowed against the lump in my throat. I felt our age difference then. He seemed so much older and wiser, more patient and knowledgeable than I. It seemed that trusting him was the best decision to make. I’d trusted him at the most precarious of moments in the past weeks, and he’d proven himself time and time again. I started as he gently spun me around, and I felt him begin to unfasten the buttons that secured my dress. I closed my eyes. He was my husband, now. It was proper.

The minutes ticked by as he slowly unbuttoned my dress and pulled it over my head, laying it across the foot of the bed. He continued removing my layers of clothing until I stood in front of him wearing naught but my thin chemise, which he lifted and pulled straight over my head. Next came the drawstring to my undergarments. And then I was bare to him.

His thumbs circled my breasts, and I gasped at the sudden sensation that lit my insides to fire. Heat pulsed between my legs and I felt my nipples harden. He smiled softly to himself. He released my breasts and tugged me down so that I sat upon his lap.

His hand gently kneaded my breast. I swallowed and nodded. “Yes, sir.”

“And you do know that if you disobey, I’ll punish you. Don’t you?”

His mouth traveled the length of my arm, down my shoulder to my breast. He kissed me again, and his tongue flicked out. I gasped at the sudden sensation. He spoke again in a low whisper.

“But tonight, on the night you vowed yourself to me, I’m feelin’ merciful,” he said. “Tonight we start anew. Tonight, Pearl, you belong to me.”

Each touch of his hand, or whisper from his mouth, sent pleasant sensations through me, even as I trembled with anticipation and apprehension. His hand smoothed my skin, over and over again.

“You’re beautiful,” he murmured. “And you’re mine. But if you’re mine, you will mind me. Won’t you, little one?”

2016-06-18
+admin
Previous: The Alpha’s Pet by Loki Renard
Next: The Virgin Captive by Kallista Dane