Claimed on the Frontier Puts Down Roots on Two Top 100s! 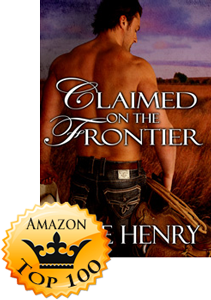 ★★★★★ A. Smarts @ Amazon.com “LOVED IT!” on June 20, 2016
I LOVED THIS BOOK. Usually when I read romances with a dominant hero, I am more intrigued by him than by the heroine. In this case, however, I fell in love with the heroine first. She is such a likeable character and, from the beginning, the author paints a beautiful picture of her feelings and needs. In steps the hero. When he arrived I was already rooting for the heroine and hopeful that she find someone worthy of her.

Aaron certainly checks off that box and more! Extremely dominant, fierce, and straightforward, he is just the man she needs, although she’s not sure if he’s what she wants in the beginning. Used to very little discipline or structure as a result of a loveless home life, she doesn’t quite know what to make of the stern man who insists on her absolute obedience for her own safety and well-being. Still, she finds herself drawn to him because she finds in him something she’s never experienced before—protection and leadership she respects. It takes some painful spankings for Pearl to learn that Aaron is not a man to be tested, but the punishments are lovingly administered and she learns from them and is ultimately better off because of them.

Along with two wonderful main characters and well-developed side characters, the plot of this book is exciting, with some twists and turns along the way. The sex and spanking scenes are seriously HOT. Even if you’re not a fan of historical books, you will likely enjoy the chemistry between the characters, as well as the exciting storyline. I couldn’t put it down until I finished every last page. Five well-deserved stars!

★★★★★  Lolly @ Amazon.com “LOVED IT!!!” on June 20, 2016
I really, really LOVED this book! Aaron and Pearl and the secondary characters all just came to life and pulled me into their story. I didn’t want it to end! Jane Henry has become one of my new favorite authors; I love her style of writing. Awesome read!

★★★★★ Redrabbitt @ Amazon.com “I OPENED THE DOOR, AND YOU RAN THROUGH” on June 20, 2016
I was captivated by this tale from the first page until the last and at the end, I just sighed. What a beautiful story with so many emotions, fear, heartache, uncertainty, longing, dreaming and finding love. Pearl was orphaned when a small child and then taken into the home of the Mr. and Mrs. Fitzgerald, who treated her harshly and like a servant. Aaron, Samuel, and Matthew Stanley became her saviors when the Fitzgerald home was attacked, and they were killed, leaving this young woman alone again. The adventurous Pearl will journey into the unknown, with a promise of a home, with the Stanley brothers under the discipline of the very dominant and sometimes overbearing Aaron. From their journey westward to joining the family’s new homestead and being accepted, we are voyeurs into the life of Aaron and Pearl as they find their way not only as husband and wife but also as friends and lovers.

The tale between Aaron and Pearl becomes a beautiful love story where she needed him – to protect, watch over and lead her, to discipline when necessary and help her grow and learn. He needed her to need him, and she does. The dialog and characters are heartwarming and entertaining. Disclosure: I received an e-copy of this book in exchange for an honest review. All thoughts, opinions, and ratings are my own.

★★★★★ Heart5 @ Amazon.com “Historic Romance” on June 23, 2016
I loved this latest release from Jane Henry. Orphaned as a child, Pearl has never known love or security. Raised as a servant by Mr. and Mrs. Fitzgerald, she longs to know what it would feel like to belong to a real family. Pearl’s future changes drastically when she is rescued by the Stanley brothers during a robbery of the Fizgerald home. With nothing holding her back, Pearl jumps at the chance to join the brothers on their trip to a new settlement.

Aaron is the oldest of the Stanley brothers. Left behind to clear up some legal issues, he is headed to the family’s new settlement with his younger brothers Samuel and Matthew. A simple stomach ache forces them off the trail and into the Fitzgerald’s barn on just the right night. One look at Pearl and he knows he can’t leave her behind. Having filled in for his father for almost a decade, Aaron demands obedience from everyone, and Pearl is no different.

At the heart of this story is an incredibly well written romance. Aaron is the ultimate alpha male, with his stern, but loving demeanor. Pearl wants nothing more than to please Aaron, but the concept of love and protection is so new to her she sometimes struggles. The dialogue between the two is seriously hot…like strap an ice pack to the Kindle to cool things down kind of hot. Ms. Henry has definitely mastered the language of the stern, dominant male, and Pearl’s submissive response was just as perfect.

I hated to see this book end. I don’t normally re-read books, but I think I’ll definitely pick this one back up at some point. I really hope the author decides to make this a series, I would really like to get to know the other Stanley brothers a little better.

★★★★★ Sam @ Amazon.com “This is easily one of my favorite books” on June 23, 2016
This is easily one of my favorite books. I loved the relationship between the main characters and how the supporting characters added to the story. This book was longer than some in the genre which helped to make it a complete story. The setting was well- described and a great background for Aaron and Pearl’s relationship. I will admit that their was one character that I was rather hoping would get some well-needed discipline. I would like to read more by this author.

★★★★★  Christine Campbell @ Amazon.com “Good” on June 20, 2016
This book captured me when I first opened up the book. Their relationship grew into a great relationship. He would discipline her n than he would comfort her. I thought it was very good

★★★★★ Krissyre @ Amazon.com Heartwarming and HOT!!” on June 18, 2016
With engaging characters, a deep and poignant love story, and plenty of heat, this book checks all of the boxes and then some.

Pearl is a woman who was orphaned young and has never known what it means to be loved or to have a family. When more misfortune befalls her, she has no choice but to journey west with Aaron… But under Aaron’s stern, watchful eye, and with the help of his steady (and sexy!) discipline, Pearl finds happiness at last, blossoming into a confident, intelligent, and much-loved woman.

I couldn’t stop smiling after reading, and I sincerely hope that Samuel gets his story soon!!