Claiming His Captive by Sassa Daniels 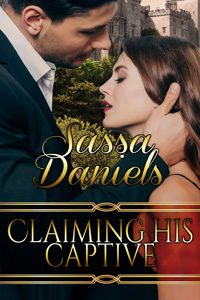 After being threatened by a man who claims her late father owed him money, twenty-six-year-old Hannah Carson reluctantly agrees to gather information for him. But Hannah’s situation goes from bad to worse when she is caught in the act of spying on a wealthy couple, and almost before she knows it she has been stripped bare for a humiliating search by the family’s head of security.

Cameron Fraser takes the safety of his clients very seriously, and when he spots a young woman acting suspiciously around them he makes it his business to find out who sent her. Hannah will tell him everything he wants to know, one way or the other, and he wastes no time in whisking her away by private jet to a remote castle where he can interrogate and punish her as he sees fit.

Though Hannah is shocked by Cameron’s readiness to shackle her in what was once a dungeon, his bold dominance leaves her deeply aroused, and a painful, embarrassing chastisement with a leather tawse merely increases her need for him to ravage her roughly and completely. But once Cameron has used and enjoyed his beautiful captive as thoroughly as he pleases, will he send Hannah on her way to face her troubles alone or has he decided that she is his to claim and keep?

Publisher’s Note: Claiming His Captive is a stand-alone sequel to Donovan’s Rules and Under House Arrest. It includes spankings and sexual scenes. If such material offends you, please don’t buy this book.

“What is it you think’s happening here, sweetheart? This isn’t a game and there aren’t any rules. You’ll take what I give you and be grateful I know when to stop.”

Hannah huffed and turned to bury her face in the bedsheets. It would be foolish to argue with Cameron when there was no way she could win. If he was determined to punish her, he would do it and the more she protested, the worse it would be. Bracing herself, she focused on keeping her breath steady. If she stayed calm, she’d get through this humiliation more easily.

Her reaction as his palm cracked off her butt cheek for the first time was unexpected. A giggle rose up inside her, but she suppressed it. When Cameron struck her again in a different spot, she had the same response to the fleeting pain but this time she couldn’t help but let out a laugh. It had to be some sort of defense mechanism. She often sniggered at inappropriate times, like when she was younger, and her father told her the dog had died. He’d looked at her as though she’d lost her mind and she wondered whether Cameron thought she was a bit strange now.

As Cameron continued to spank her, his hand smacking off different parts of her bottom in a steady rhythm, the urge to laugh disintegrated. This was starting to hurt. Each strike was a little more painful than the last and her flesh began to heat up. By the time he finally stopped, she was panting for breath. Without the blows falling, her bottom seemed to throb harder, making her whimper as the discomfort grew. Closing her eyes, she tried to block out another troubling sensation, her burgeoning arousal.

She drew in a sharp breath as Cameron slid his hand between her legs and gently ran a finger along her feminine slit. Unable to help herself, she rubbed against him.

“Look at that.” Cameron held his hand up for her to see the evidence of her desire glistening on his finger. “Soaking wet.”

“Uh-huh.” She could formulate no other response. How was she supposed to react to the humiliating fact she’d been turned on by being spanked?

“I don’t think you’re going to like this next part quite as much,” he said as he picked up the tawse. “Now, hold still and don’t clench.”

There was barely time to register the instruction before a whooshing sound alerted her to the tawse cutting through the air behind her. As it made impact, there was a sharp sting and then came an unpleasant nipping sensation.

“Owwh!” she screeched. “That fucking hurt.”

She wriggled her hips as she tried to shake out the pain.

The strap struck again, and she yelped like a dog whose tail had been trodden on. That implement was pure evil. Tears pricked at her eyes and she was sure her arse was on fire. The third strike made her scream and she shook her head violently as though that would somehow make it all better. Cameron tapped her thigh in warning and she stilled. The tawse seared her flesh once more. She might just about have coped with its sting if the stiff leather strands didn’t pinch her skin the way they did as a nasty little parting gift. As one blow fell after another, she lost count of how many strokes he’d given her. Moaning and crying, she clutched at the sheets, tears flowing freely down her cheeks. Her bottom ached but worse than that was the humiliation of being unable to hold herself together.

That shouldn’t have warmed her to the core, but she had to admit every time he called her that, even sarcastically, she melted inside. She took a deep breath and when the strap landed once more, she whined and buried her face in the bedclothes. She longed for this to be over, not just because it hurt but because there was something else she needed. Her body had come alive in a way she hadn’t expected. Every part of her bristled with sexual awareness as a fluttering stirred her insides. She wanted Cameron’s touch to soothe away the pain.

2019-04-26
Chris
Previous: His Errant Ward by Celeste Jones
Next: Roughneck: A Dark Romance by Piper Stone