Claiming Their Mate by Morganna Williams 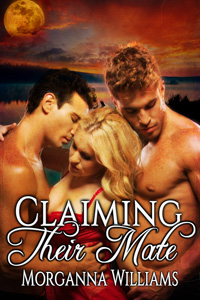 The moment Madison Anders walks into Jared Gentry’s ornate office building, she knows he’ll never hire her. The kind of employee who works at a place like this is the skinny, confident model type, which Madison doesn’t resemble even slightly. But when Jared takes one look at her, Madison becomes frightened—not of him, but of her sudden longing for him take her right then and there. When he moves to fulfill her need, she cannot help but submit to the pure passion and pleasure of his powerful, dominant lovemaking.

Shocked at her behavior, Madison runs from Jared’s office, ignoring his orders to stay put. But before long, Jared shows up at her apartment to explain that he’s a werewolf, and that alphas like him have mates who are destined to be theirs. When Jared takes her over his knee and spanks her bare bottom for her earlier disobedience, she tries to protest, but her body betrays her and his practiced touch after her punishment leaves Madison panting and craving more, which he gives her, over and over again.

After Jared introduces Madison to his second, Ethan, and explains that seconds have the same destined mate as their alpha, she quickly discovers that the two handsome, fiercely dominant men will both be ensuring that her needs are met—both in and out of the bedroom. But not all of the wolves in the pack are happy that their leaders have claimed a human as their mate, and soon Madison’s life is in grave danger. Can Jared and Ethan save her before it’s too late?

“Madison,” he said firmly, clearly trying to get her attention focused again. Jared nodded when her eyes cleared again and focused back on his own. “You will never run from me again. Do you understand?”

“You will never attack a member of my guard again. Do you understand?” His stern countenance allowed no room for anything but an affirmative answer.

“You will never attempt to lie to me again for any reason. Do you understand?”

Madison didn’t really understand what he wanted but his fierce expression was filling her tummy with butterflies and she just wanted them to go away.

“Now you will take your punishment and we will move on from here,” he told her resolutely.

“Yes. I dislike having to spank you so soon, but I will begin as I mean to go on. You will not run from me or defy me for any reason,” he said before pulling her to lie face down across his strong thighs. “This will be a short punishment to give you an understanding of what will happen should you misbehave again.”

Madison tried to flip off his lap frantically but he held her easily, one big hand resting on the small of her back as his right leg lifted to scissor across the back of her thighs, leaving her bottom arched high across his left leg in a perfect target. “Noo! You can’t!”

Jared ignored her protest and showed her he could by simply bringing his right hand down hard on her bottom, leaving a hot sting in its wake.

“Oww!” she yelled in response.

He wasted no time dragging things out with further explanations. His hand began to fall in a rapid flurry of swats covering her entire backside in what felt like angry bee stings. Madison jerked and yelped as his hand fell again and again. He paid special attention to the tender crease where her bottom met her thighs.

Madison would have been frantically wiggling her bottom to relieve the sting if he didn’t still have her pinned so tightly. When his hand stopped falling and came to rest lightly on her hot bottom, she shivered in response. The heat from her well-spanked bottom was beginning to spread into other areas.

“Are you ever going to run from me again?” Jared asked Madison just before he delivered a volley of five swats harder than any of the others.

“No!” she cried, desperate to end the spanking.

“Are you going to lie to me again?” Again five even harder swats followed the question.

“No, sir!” She wailed the words this time.

“Are you ever going to attack any of my guards or any other males?”

“No, sir!” Madison yelled before his hand had a chance to fall.

Madison groaned as he started to rub, skimming his hand lightly across her scorched flesh as he unscissored his legs to give him better access. She moaned in response and his hand slid down her globes, his fingers trailing into the cleft of her bottom.

Madison forgot the spanking and her burning bottom as the needs of her body took precedence and she opened her thighs for him. She was rewarded with two fingers sinking deep inside; he positioned her on his knee so it pressed against her clit every time she moved with the thrust of his fingers.

He withdrew his fingers to return them with a third as the hand on her back urged her to press firmly and rhythmically against his knee while his fingers thrust hard and deep.

Madison’s back arched as she came loudly across his lap.

2014-12-12
+admin
Previous: Assigned a Guardian by Emily Tilton
Next: The Doctor’s Little Girl by Alex Reynolds