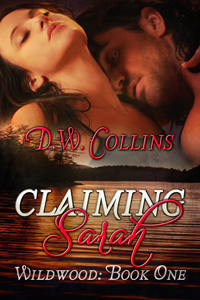 After a devastating worldwide epidemic brings a cataclysmic end to life as she knows it, Sarah struggles to find food and shelter in a city run by ruthless warlords. Seeing no other choice, she sets out under the cover of darkness, leaving her home in search of a better life. After a perilous journey she finds her way to Wildwood, a community run by Paul Parker, a devout religious leader whose followers stockpiled supplies long before the arrival of the plague.

The people of Wildwood provide Sarah with food and safety, but their way of life is far different from anything she has ever known. In this community, disobedient women are spanked by firm-handed men. Though shocked by their ways, Sarah decides she would rather stay and face a sore bottom from time to time than go it alone in the world.

Paul Parker is a competent leader, but underneath his strong exterior is pain that never healed after his wife’s death. He is immediately attracted to Sarah’s feisty nature and her defiance in the face of strict discipline, and he decides he will marry her. Sparks fly almost immediately after the wedding, though, and Sarah soon finds herself over her new husband’s knee. Can she learn to accept both his dominance and his desire to love and cherish her?

“Why are you here?” he demanded. “I told you to go to the dining hall!”

Sarah’s face went blank. She did not have a good answer. Why was she here indeed? She vainly tried to make an excuse, but he would have none of it. He grabbed her upper arm and dragged her to a nearby log. She struggled valiantly, but her effort was in vain. He upended her over his lap and hiked up her skirt for the second time that day. She could not complain when he stripped off her panties; the damn things were full of sand from their earlier activity.

His hand struck her round bottom with a loud crack. She tried to get away, but he had her wrists secured behind her waist in one of his strong hands. This time she was able to find her voice. “Stop! That hurts!”

Parker laughed. “A spanking is supposed to hurt.” He cracked her upraised bottom again. Sarah groaned when she felt him pull her knees apart. “Keep those legs spread. I intend to redden your thighs when I’m finished with your hind end.” Six rapid blows fell on her burning bottom.

Sarah hated being spanked, and she hated having her legs spread even more. Anyone who walked by would be able to see her most private parts displayed. She tried to ease them back together, but Pastor Parker interrupted her plan

“I told you to keep your legs spread, young lady.” He smacked a formerly untouched thigh and made her wail. “If I have to tell you again, I’ll take off my belt and stripe you proper.” His hand fell a dozen or so more times. She tried to wriggle away, but he was far too strong to let her make any escape. His hard knee drove into her belly and made it hard to breathe.

The spanking he was delivering this time was no playful tease like the last one. Sarah had no idea that Pastor Paul Parker had a right hand that must surely have been carved out of solid oak. The spanking burned her fair skin like the fires of hell that the prophet warned the colony members about.

“When I tell you to do something, young lady, I demand that you obey me,” he roared as he wailed away on her much inflamed hind end, emphasizing each word with a fiery blow.

If the humiliation of being spanked were not enough, a crowd of curious colonists gathered to see what the pastor and the feisty redhead were up to. Her face was as red as her bottom. After a while, David Walsh approached. “If your hand gets tired, I can take a turn. I know this girl’s been nothing but trouble.”

The pastor’s next words stunned Sarah and every other person in the gathering. “I know you mean no offense, Brother Walsh, but from this day on, no man lays a hand on this little lady but me. Is that understood?”

2013-12-20
+admin
Previous: Claimed by the Beast by Natasha Knight
Next: The Count’s Discipline by Emily Tilton